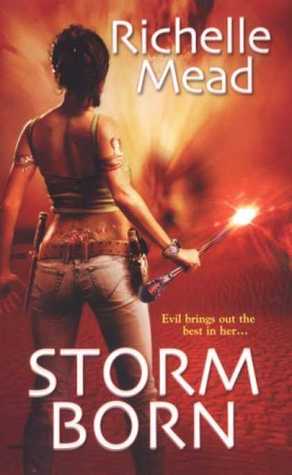 Just typical. No love life to speak of for months, then all at once, every creature in the Otherworld wants to get in your pants...

Eugenie Markham is a powerful shaman who does a brisk trade banishing spirits and fey who cross into the mortal world. Mercenary, yes, but a girl's got to eat. Her most recent case, however, is enough to ruin her appetite. Hired to find a teenager who has been taken to the Otherworld, Eugenie comes face to face with a startling prophecy--one that uncovers dark secrets about her past and claims that Eugenie's first-born will threaten the future of the world as she knows it.

Now Eugenie is a hot target for every ambitious demon and Otherworldy ne'er-do-well, and the ones who don't want to knock her up want her dead. Eugenie handles a Glock as smoothly as she wields a wand, but she needs some formidable allies for a job like this. She finds them in Dorian, a seductive fairy king with a taste for bondage, and Kiyo, a gorgeous shape-shifter who redefines animal attraction. But with enemies growing bolder and time running out, Eugenie realizes that the greatest danger is yet to come, and it lies in the dark powers that are stirring to life within her...

Richelle Mead is one of those authors who’s grown on me, slowly but steadily, since I first discovered her ten(ish) years ago. At this point, I’ve pretty much read everything she’s written (BLOODLINES being the one exception), but for whatever reason, she’s never one of my obvious choices whenever someone asks me who my favorite authors are.

DARK SWAN is a perfect analogy for my relationship with with Mead.

My most recent (and more than likely last) reread of the series hammered home why, as much as I tell myself I love it, I’m never completely convinced.

Let me explain . . . *crosses fingers and hopes for the best*

Why I love/hate STORM BORN by Richelle Mead:

Mead’s version of Faerie is everything a lover of folklore could ask for. The individual kingdoms are subject to their monarch’s whim, the landscape itself defies physics, and the inhabitants are as diverse and tricksy as anything found in the in between spaces where European fairy tales thrive.

The men are rapey assholes. Maybe not all of them, but enough of them are that I gave up trying to keep track of all the times Eugenie had to fend off unwanted advances, b/c various gentry were trying to knock her up, b/c prophecy.

She’s well-trained and efficient. She fearlessly confronts Fae interlopers in the human world, protecting those who can’t protect themselves. She’s a little bit damaged, but instead of whining or feeling sorry for herself, she embraces her inner snark. Professionally, she’s just likable.

She’s also judgmental as hell and stupid enough in her romantic relationships that you wish her evil minion Volusian was free to do all the terrible things he threatens to do to her.

Seriously. The King of the Autumn Court is one of my all-time favorite book boyfriends, and he will remain one regardless of how much the rest of this world depreciates:

Long auburn hair, reminiscent of the trees outside, hung around him, highlighted with every shade of red and gold conceivable. He could have been autumn incarnate. He had the most perfect skin I’d ever seen in such a vivid redhead: smooth and ivory, with no freckles or rosy color. A cloak of forest-green velvet covered unremarkable dark pants and a loose, white button-up shirt. He had well-shaped cheekbones and delicate features.

Even if I didn’t have a thing for gingers—which I totally do—I would worship at Dorian’s alter, b/c beyond all his red and gold glory, his kink (just some light bondage, people, don’t get nervous) is off the charts sexy.

As much as I love Dorian, I hate with equal fervor, the self-righteous half-kitsune who enables Eugenie’s early refusal to accept her heritage.

And she can’t make up her damn mind between the two of them. SPOILER ALERT: the entire four book series is nearly over before she finally chooses.

And that’s it in a nutshell. For everything I love, there’s a counterpart that I hate. But my love of the good things is so great that I can’t stop reading her. Which makes me hate myself a little bit.

If there’s such a thing as a dysfunctional relationship with an author or series, this is it. Read at your own risk.

PS – My sister is getting married todayyyyyyyyy!! Totally unrelated, I know, but I’m super excited, so I don’t care. *throws confetti in the air*