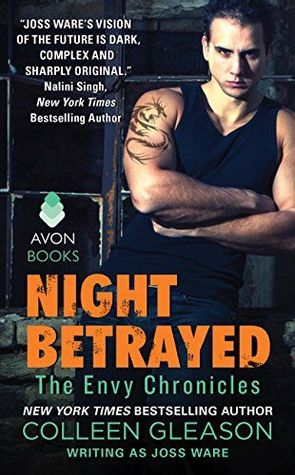 The world they knew is ashes.
The world that remains is in peril.
And five extraordinary survivors are humankind's last, best hope.

The Change that devastated the earth did not destroy Theo Waxnicki. It made him something more than human--eternally young, eternally beautiful . . . but not immortal. When he dies on a mission against the Strangers, he is lost to the darkness . . . until a miracle lady brings him back.

Born during the apocalyptic storms and earthquakes that left the world in ruins, Selena has dedicated her life to easing the pain of others. But Theo is the first in her care to survive.

Responding to Selena's tender touch, Theo starts to live again, to feel and desire again. But joined in a world of terrors, the secrets they can never share make them targets. And love could be the ultimate betrayal.


Book four of the Envy Chronicles tells Theo’s story. Theo is seventy eight, but due to a weird situation that happened during the “Change” he only looks about thirty. To keep things even more interesting, he has a twin brother that does look every bit of his age. Both survived the apocalypse that happened fifty years before and both are part of the resistance. Resistance is needed due to the “Strangers” that rule the world, are immortal, and pretty much live in luxury while everyone else lives an almost hand to mouth existance, in some cases. They allow no technology, but Theo and his brother were major tech geeks in their past, and they are connecting the computers in areas that surround the town of Envy-once known as Las Vegas. The Strangers are bad enough as villains, but they also employ bounty hunters that make life even harder for the other survivors. And as icing on the cake, they have created zombie like creatures that only come out at night, and are hungry for human flesh. Just another way to keep the people in line.

When Theo gets hurt and is close to dying, he is brought to Selena to ease him into death. She can tell when someone is dying, and Theo is close. Because of her “gift”, she operates a hospice of sorts in an old mansion left over from before the change. Selena is an attractive fifty year old that has a seventeen year old son, Sam. Events happen to keep Theo from dying-not a spoiler as this is his book! When Theo meets Selena he is pretty much immediately smitten with her. On Selena’s part, she has no wish to be a cougar-but even she can’t resist the pull towards Theo. Theo keeping his secret about his actual age, made for some conflict. Especially as Selena is so not into the age difference. I was just happy that Theo had found somebody as he has recently gone through his own heartbreak.

So much happens in this read and I have barely touched on most of it. There’s ongoing story threads from previous books, and some of that comes into play in this book as well. This series abounds with good characters as well as good villains. Theo isn’t the only character that came through the Change now different in a supernatural way, and it’s been fascinating to see the journey each of these men goes through in this new world. Each book, features one of these men, and the woman they eventually fall for.

Romance, action, some heartbreak, and all the ongoing story threads and villains kept this book a real page turner for me. It was fun seeing Theo and Selena fall in love, Selena fighting it until she can’t. I highly recommend this and the entire series to adult paranormal romance and dystopian fans. Urban Fantasy and/or science fictions fans will find a lot to like about these books as well.