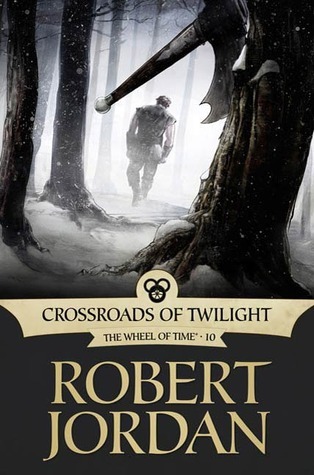 In the tenth book of The Wheel of Time from the New York Times #1 bestselling author Robert Jordan, the world and the characters stand at a crossroads, and the world approaches twilight, when the power of the Shadow grows stronger.

Fleeing from Ebou Dar with the kidnapped Daughter of the Nine Moons, whom he is fated to marry, Mat Cauthon learns that he can neither keep her nor let her go, not in safety for either of them, for both the Shadow and the might of the Seanchan Empire are in deadly pursuit.

Perrin Aybara seeks to free his wife, Faile, a captive of the Shaido, but his only hope may be an alliance with the enemy. Can he remain true to his friend Rand and to himself? For his love of Faile, Perrin is willing to sell his soul.

At Tar Valon, Egwene al'Vere, the young Amyrlin of the rebel Aes Sedai, lays siege to the heart of Aes Sedai power, but she must win quickly, with as little bloodshed as possible, for unless the Aes Sedai are reunited, only the male Asha'man will remain to defend the world against the Dark One, and nothing can hold the Asha'man themselves back from total power except the Aes Sedai and a unified White Tower.

In Andor, Elayne Trakland fights for the Lion Throne that is hers by right, but enemies and Darkfriends surround her, plotting her destruction. If she fails, Andor may fall to the Shadow, and the Dragon Reborn with it.

Rand al'Thor, the Dragon Reborn himself, has cleansed the Dark One's taint from the male half of the True Source, and everything has changed. Yet nothing has, for only men who can channel believe that saidin is clean again, and a man who can channel is still hated and feared-even one prophesied to save the world. Now, Rand must gamble again, with himself at stake, and he cannot be sure which of his allies are really enemies.


CROSSROADS OF TWILIGHT is notoriously many WoT fans’ least favorite book in series. It’s been years since I last read it, so I let all the negative hype get to me, and I started dreading my revisit, but it wasn’t half as bad as people made it out to be.

I think the main problem is that for more than half of the book, we’re reliving how the previous installment ended from numerous alternate POVs. It doesn’t help that the key event we’re reliving took up less than 10% the first time around.

So we spend five times as long on a less exciting version of events.

The fact that we’ve already experienced this time period is unrelated to all the new things. New things that are important to the End Game, and if you focus on the new material, rather than the lack of forward motion in the timeline, it’s still a good installment.

Important/Cool stuff, or all the reasons why CoT doesn’t suck:

1. Noal Charin—who is he really?

We meet this old guy in WoT #9, and if you’re like me, you were quickly smitten with his tales of grand adventures past . . .

Then CROSSROADS OF TWILIGHT opens with the usual snippet of prophecy, except in the notation, the translation is attributed to one Jain Charin, also known as . . . wait for it . . . JAIN FARSTRIDER.

Is Noel really the famous traveler, originally from Malkier?

I don’t know, but I’m hopeful.

Gets the set down of his life, from (the usually useless) Elayne no less, and the varying reactions of three Aes Sedai in question give us our first solid lead on the identity of the Black Sister.

3. Egwene figures out how to make cuendillar.

Which may not sound like a big deal, but it is. Trust me. Egwene’s got a plan.

4. Aes Sedai are bonding Asha’men all over the place.

Asha’men are bonding Aes Sedai too, and I predict CHAOS. If for no other reason than the Warder bond doesn’t work the same way on men who can channel as it does on men who can’t.

5. Halima disappears long enough for Egwene to get her Dream on.

And not only does she have a second Dream that suggests Mat will be successful in his endeavor to blow shit up, but she has a dream about a Seanchan woman with a sword and a shifting face who will help her.

No specifics on how this mystery woman will help Egwene yet, but I’m hopeful that the shifting face means that she’s another Hero attached to the Wheel, spun back into world for Tarmon Gai’don.

“Do you think Hand of the Shadow is just a name?” The Myrddraal’s voice no longer grated. Hollow, it seemed to boom down caverns from some unimaginable distance. The creature grew as it spoke, swelling in size till its head brushed the ceiling, over two spans up. “You were summoned, and you did not come. My hand reaches far, Mesaana.”

Fair warning, this particular scene suggests that rape is being used as punishment. It’s left at insinuation, but still . . . FYI.

7+. All the Big Deal stuff I need to spoiler tag.

View Spoiler »A. Logain tracks down Rand b/c Taim is shady.

B. Rand calls a truce with the Seanchan.


Once again, there are a multitude of interesting questions raised, the foremost being, who is Norla from the Black Hills? And once again, I heartily recommend this series. #cantstopwontstop

2 responses to “Review: Crossroads of Twilight by Robert Jordan”