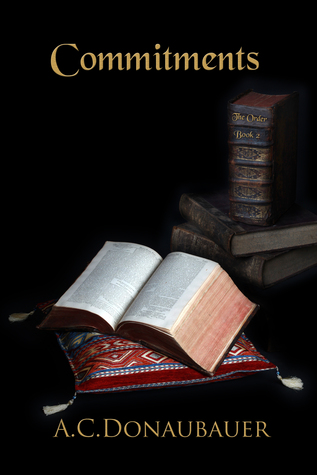 Ram'an has, to Enric’s great relief, left Anyueel again to return to his home country - which leaves him to figure out the challenge that Eryn still presents to him in more than one area of his life.

Eryn is restless, unnerved by the Order’s demands and her own urge to do something useful. Thus an expedition into the woods to teach the herb gatherers in the city how to provide her with acceptable goods seems just the thing to do to pass the time until the new healer’s place is ready for use. Ten peaceful days of collecting plants far away from the city. Or at least that’s the plan.

This is the second book in The Order series by A.C. Donaubauer. I really enjoyed the first book and was excited to get the second. This series has really long stories, but I really enjoy them, so it doesn’t bother me that they are 900 to 1,000 pages long. That being said, it took me a long time actually start this book. That’s because I’ve been in a bit of a slump, so I knew that trying to tackle such a long story would be difficult in that frame of mind. When I went on vacation earlier this month, I thought that was the perfect time to get started. I had several days to do nothing but read, and this was the first book I picked up.

This story picks up right where The Order left off. Eryn is working on her healing practice. She is trying to get some of the other magicians to learn the craft. She is still inept at politics (she reminds me a lot of myself in this respect). She just wants to do her job and talk straight. She says what’s on her mind and doesn’t tend to think about all the ways others could try to play it. There are people who are desperately trying to help teach her the world of politics, but it is something that she isn’t a fan of (I really don’t blame her at all).

She does leave the castle walls with some of the herb gatherers to show them how to find and properly preserve the herbs that she needs. Here, she brings along a few familiar faces. Plia, the servant girl, and Vern, Eryn’s first friend in the kingdom and son of her trainer, Orrin, both go along with her on this excursion. She gets young Vern permission to go because he’s going to draw all the plants to be put in a book for later training and the plants need to be documented. Plia goes as a servant and finds that she’s really good with the herbs and has a lot to learn. We also get to meet several of the guards that go with her for her and the team’s protection. She is still able to get herself into trouble.

While on the trip, she comes across a wild cat. During a large storm, a tree falls on the cat’s mom, leaving behind a cub. She couldn’t bare letting one of the guards kill the cub, so she decides that she will keep it as a pet (no recommended at all in real life, by the way). She does worry what her husband, and second-in-command wizard, will think of this new addition. She is quite surprised when she comes back and learns that he already knew about the addition. She figured out two of the spies on her own and who they reported to, but while she knew the other two guards she knew were spies, she didn’t know which person they were giving their information to.

After they get back, the king calls Eryn into his presence. He has taken upon himself to help teach her the fine art of politics. He also manipulates her into a diplomatic trip back to her original homeland. She doesn’t want to go, because she wants to work on her new health care center, but king convinces her that she could learn a lot from the healers in her old world, not to mention books. The girl loves books (another thing we have in common LOL). So her and Enric make the trip.

Once they arrive back in Takhan, that is when things really start to get interesting. Eryn meets some of her family that she didn’t even realize she had. Her family is pretty interesting and things get even more political. We also learn more about Ram’an (the diplomat that we met in book one) and his interest in Eryn. I won’t go into too much detail because this is where I think the story has the most interesting parts that I don’t want to spoil. I will mention how much I loved Eryn’s Uncle Valrad and her cousin Vran’el. Vran’el is gay, but has daughter. In this world, offspring is very important because everyone wants heirs. Marriages are also generally arranged, but both parties do have to agree. In Vran’el’s case, he had an arrangement with the mother. She didn’t want to get married and he wanted to pursue a relationship with a man. Once he conceived a child he was free to do whatever he wanted. He has a wonderful relationship with another man. The story did not go into whether Vran’el’s lover had a child or not.

Once again, this book was another great addition to the series. The story is very well told, but also very long. There were parts that were a little slow and things that I thought could’ve been edited down some, but still a wonderful story. It is really the characters that make the story for me. I loved my time with the old favorites from book one, but I also really enjoyed the addition of new characters. I’m excited to see what goes on in book three, which was released earlier this year. With a title like, Schemes, I’m expecting even more politics in the future.

This quote is between young Vern (a teenager) and Eryn about her dislike of political games, but using them too.

“Well done. he complemented her. “So the woman who ants to show that we can all work together without tricks and dishonesty just tricked a bunch of her gatherers into teaching her about the weather. Nice move.”
“You should have stopped after Well done.” She sighed.
He pretended to think for a moment, then shook his head. “No. Where is the fun in that?”

This quote is about Urban, the large cat that Eryn adopted on her herb gathering trip. Enric took her with him for a hunt.

Her gaze fell on Urban and the mess of bloody smears on the ground before her. “She has been successful as well, hasn’t she?”
Enric followed her gaze, still frowning. “Yes. Three small animals. Not bad for her first hunting outing, not at all. It seems that gutting our throw cushions served as sufficient preparation for the real world.” he added dryly.

My last quote is about Obal, Vran’el four-year-old daughter, who loves Urban.

“Cat!” Obal screamed when Urban strolled into the room. “Come here! Here!”
The mountain cat froze in mid-step, then turned around in a liquid movement quickly to slink back into the corridor she had emerged from.
“Another one who will be glad when she can return to the peace and quite of Anyueel tomorrow, I imagine,” Valrad laughed. “The might beast, put to flight by a four-year-old girl.”