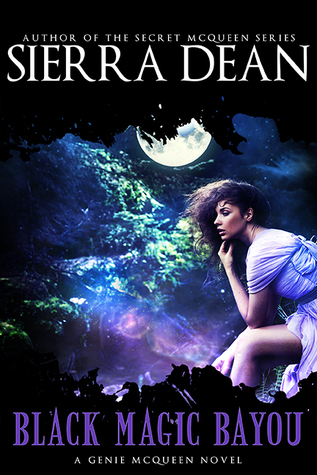 She grew up apart from her pack, trying to hone her dangerous magical gifts, while her twin brother Ben stayed home to be groomed for a leadership role. But after proving her mettle to her uncle Callum, the King of the South, she’s suddenly found herself the alpha of New Orleans.

As she tries to adapt to her new, powerful position—and a blossoming relationship with the werewolf outcast, Wilder Shaw—Genie is confronted with something that only the witch part of her can fix.

It seems the sorority sisters at Delta Phi have been going missing, but leaving everything they own behind. Those remaining in the house have reported strange happenings since the girls have gone missing. With no bodies, and no clues, Genie’s ex Cash turns to her for help on behalf of his new girlfriend.

Can Genie unravel the mystery of the vanished girls, maintain order in the New Orleans pack, and keep herself alive long enough for a night out with Wilder?

Genie’s about to find out what’s scarier—a haunted house or going on your first date ever in your twenties.


I’m having a hard time not comparing Genie McQueen to her older sister, Secret. Not only do they share DNA, but they are both half-breeds, have a knack for trouble, and with the introduction of Santiago, another love triangle is most likely already in progress. I was on the fence after BAYOU BLUES, and now after reading BLACK MAGIC BAYOU, I have one foot firmly on the walk-away-from-this-series side of the hedge. Book 3 or bust!

Genie taps into her witchy side in this installment, and the author crafted a plot to match. Two of her wolves are suspected of murder, and there’s something bizarre going down in the Delta Phi house. These threads cross paths more often than you’d think, and each problem has a magical fix, so other than a little posturing when McQueen’s twin brother shows up to ruffle her Alpha feathers, this story was only moderately furry.

After skirting around her attraction to Wilder Shaw in the previous volume, the protagonist’s resistance crumbles, and she takes the sexy mechanic for a ride. I was happy with this turn of events until Genie’s ex walked back into her life with his new girlfriend. Fortunately, that didn’t play out the way I’d expected however, little did I know that there was a second love interest bullet already in the chamber.

I have nothing against Santiago, and in a lot of ways he might be better suited for McQueen than Wilder. But, Secret’s romantic entanglements were probably my least favourite aspect of that series, so I don’t want a do-over with her sibling. That beef aside, Dean did dangle enough bait in front of my face to get me to trudge on thanks to the continuation of the burnt corpse mystery, and… Mercy.

The best part of BLACK MAGIC BAYOU was the bonus A HARMLESS LITTLE SECRET short at the end.