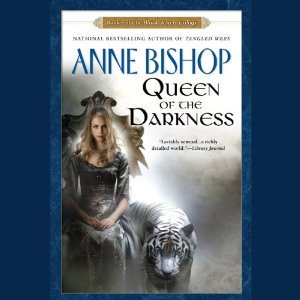 Jaenelle Angelline now reigns as Queen-protector of the Shadow Realm. No longer will the corrupt Blood slaughter her people and defile her lands. But where one chapter ends, a final, unseen battle remains to be written, and Jaenelle must unleash the terrible power that is Witch to destroy her enemies once and for all.

Even so, she cannot stand alone. Somewhere, long lost in madness, is Daemon, her promised Consort. Only his unyielding love can complete her Court and secure her reign. Yet, even together, their strength may not be enough to hold back the most malevolent of forces.

This is a trilogy that turned into a full-on series, and it took me 2 novels to warm up to Anne Bishop’s THE BLACK JEWELS world, so after finally getting my ah-ha moment, I will be stopping here. Yes, the next installments have the potential to be even better, but they could also be a return to books 1 & 2, and I don’t care for those odds. Anyway, I really did enjoy QUEEN OF THE DARKNESS; Daemon at long last stepped into his role as consort, Jaenelle showed the Blood who’s boss, and other characters such as Lucivar & Saetan got their happy ending.

Angelline is now the undisputed Queen of Queens, although not everyone has accepted that fact yet, namely her wayward family because she hasn’t fully demonstrated what she’s capable of. That being said, I found it odd that she sat on the bench for the first quarter of this story. I went into this title thinking that it was her time to rule, and that that aspect was going to be this volume’s focal point. The author does get there eventually, and it is one of the best parts, but still I was expecting something a little flashier.

I was so very happy when Jaenelle & Daemon’s relationship made it to the romantic stage that I think that I may have whooped out loud. However, given both of their pasts (i.e Angelline’s history of rape and Sadi’s years as a pleasure slave), I’d envisioned lengthy dialogue between them prior to the two jumping in the sack together. There was a fair share of tiptoeing and doubt, yet once they admitted their feelings for each other they didn’t leave the bedroom for days. It was just too all-or-nothing. I personally appreciate the in-between stuff.

As with the writing, it also took me several novels to come to terms with John Sharian’s narration, and not because he doesn’t have the voice for it, but rather due to the age and gender of the heroine. The cast is primarily male, so from a purely logistics perspective it made sense. Nevertheless, he really let loose for the conclusion! He matched Daemon’s sadistic nature in both emotion and intensity, and the execution of Jaenelle’s master plan just wouldn’t have been the same without his delivery.

QUEEN OF THE DARKNESS made me understand what everyone’s been raving about!

4 responses to “Audiobook Review: Queen of the Darkness by Anne Bishop”