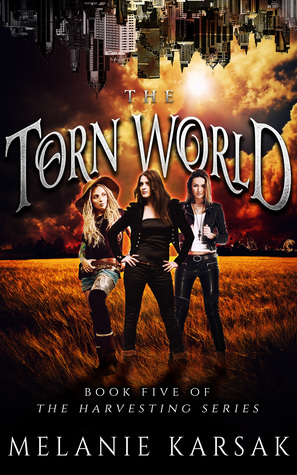 This is the way the world ends...

With the undead walking, vampires hunting, and kitsune closing in, everything seems lost. Layla and the others will need help if there is any hope of survival. But how can you endure in the dying world?

Join Layla, Cricket, Amelia, and the other survivors for the final chapter of The Harvesting Series in The Torn World.

I approached the final book in Melanie Karsak’s Harvesting series with some trepidation. I was worried for all the characters because this world that the author created has been so unforgiving to the characters, and we have lost some along the way. She doesn’t shy away from realism while writing characters that are living in the zombie apocalypse, to say the least. I should also mention that zombies aren’t the only creature to be afraid of in this series. That’s because, when most of the population of earth has been decimated, the hidden paranormal creatures were bound to show up, especially when some of them rely on humans in order to live. So yes, this is a very scary picture of what the zombie apocalypse would be like in this situation. But did I love it? Absolutely!

Reason number one for loving it? The world building. So fresh and new for this genre, at least I thought it was. I know zombies have been done over and over again, but zombies combined with the other creatures here-not so much. There’s also plenty of magic in this world building, and what’s not to like about that? Well, it depends on if it’s a good guy wielding it or one of the villains. Enough said about that.

Reason number two? The characters. I adored all of them and they were mostly all so fleshed out by now, that I felt I knew them. Layla, the sword expert from the Smithsonian, Cricket, the tilt-a-whirl worker from the carnival, and Amelia the teenage, but powerful witch, all become the main characters this time. Each has their own book or novella prior to this, so the reader is invested in each of them already.There’s also a good group of peripheral characters to love as well. Some are love interests for the main characters, some are there because they have fought brilliantly to stay alive, others are there because they have been protected. And some are there because they are of the supernatural sort, of the good guy kind. Each had their own part to play in this book.

Reason number three? Of course, it’s the writing. I found the author’s premise from the first book onward to be nothing short of interesting, entertaining, and at times heartbreaking. She wove the stories of each of the main characters through each of the books to where they all eventually found each other. I thought it was wonderfully done, and I should emphasize that these can not be read out of order because of the ongoing story arc.

This ended up being one of those series that I am sorry to see end. It just doesn’t seem like we have had enough time with the characters. I could see a followup being done a few years down the road in the characters lives, just to see where everyone is. There is an epilogue and I was extremely happy to get that.

I really enjoyed this series. I would highly recommend it to ages 16 plus, due to extreme violence and occasional mild references to sexual activity. Great read!

FYI-This is book 3 of the series, but there are also two novellas that are just as important to the story, and should be read in order with the books.