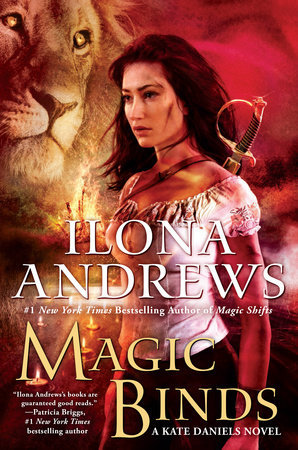 Mercenary Kate Daniels knows all too well that magic in post-Shift Atlanta is a dangerous business. But nothing she’s faced could have prepared her for this…

Kate and the former Beast Lord Curran Lennart are finally making their relationship official. But there are some steep obstacles standing in the way of their walk to the altar…

Kate’s father, Roland, has kidnapped the demigod Saiman and is slowly bleeding him dry in his never-ending bid for power. A Witch Oracle has predicted that if Kate marries the man she loves, Atlanta will burn and she will lose him forever. And the only person Kate can ask for help is long dead.

The odds are impossible. The future is grim. But Kate Daniels has never been one to play by the rules…


The first thing that pops into my head whenever I finish a KATE DANIELS volume is that Ilona Andrews can’t possibly top what I just read. Ok, so maybe there’s a whole lot of EGAD-GAH-OOOH-WHEE-ZOWIE-EEP-OMG (!!!) that precedes my first coherent thought, but then a year goes by, I pick-up the next novel, and the author duo blows the previous installment out of the water. I’m not usually a book hugger however, MAGIC BINDS evoked such strong emotions in me that they bubbled over, and manifested physically.

Kate & Curran are in the thick of wedding planning madness, and the heroine’s reluctance to tackle all of her big day musts made me feel like a bridezilla in comparison which is funny because I was extremely blasé about my nuptials. Naturally, flowers and cake tasting take a back seat when Roland starts breathing down their necks, Christopher pulls a fast one, and Julie cozies up to dear ol’ grandpa. The Andrews’ really covered ALL of their bases in this latest addition with answers and backstory aplenty!

Daniels’ efforts to piece together her lineage have been admirable, but several large gaps still remained. In this novel we learn about Roland’s pre-world domination days, and some light is shed on the rest of her family tree as well. Kate’s history linked-up nicely with her present because it helped to explain why she is currently battling with her “dark side”, and illustrated her potential paths as the princess of Shinar, granddaughter of Semiramis, niece of the City Eater, daughter of the Builder of Towers.

All of the nuggets of information that the authors unloaded on fans were reason enough to break out into song however, then there were the action montages, trademark snarky humour, and tender moments between the two protagonists which called for a full fledged musical performance. Ilona & Gordon could have quit while they were ahead, but instead they piled on an epic crusade, a close call for a much loved character, and a whooper of a last sentence that’ll keep bouncing around your brain until book 10.

MAGIC BINDS resonated so deeply that I felt it in my bones!