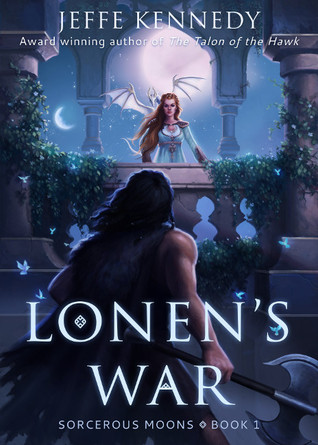 An Unquiet Heart
Alone in her tower, Princess Oria has spent too long studying her people’s barbarian enemies, the Destrye—and neglected the search for calm that will control her magic and release her to society. Her restlessness makes meditation hopeless and her fragility renders human companionship unbearable. Oria is near giving up. Then the Destrye attack, and her people’s lives depend on her handling of their prince…

A Fight Without Hope
When the cornered Destrye decided to strike back, Lonen never thought he’d live through the battle, let alone demand justice as a conqueror. And yet he must keep up his guard against the sorceress who speaks for the city. Oria’s people are devious, her claims of ignorance absurd. The frank honesty her eyes promise could be just one more layer of deception.

A Savage Bargain
Fighting for time and trust, Oria and Lonen have one final sacrifice to choose... before an even greater threat consumes them all.

This is the first of a new fantasy series by Jeffe Kennedy. I’ve been reading her Twelve Kingdoms series, which I love, so I was very excited to have the chance to try this new series. In this book, we have two different groups of people who are at war.

Destrye are a more barbarian group of people. They have no magical ability. The story starts off with them attacking one of the Bara cities.

The Bara are a magical group that has a society based on magic. They go through young life to achieve hwil, it is kinda like a state of zen (or that is the best I can describe it). Once you achieve hwil, you can then rise in the ranks as a sorcerer/sorceress. Once they are the sorceress, they can get their masks (really creepy golden masks that don’t have holes for the eyes). They also look for their perfect partner. Their relationships are symbiotic. The sorceresses are able to help fuel more magic to the sorcerers.

So, this story is told from the POV’s of Lonen, third son of the king of the Destrye, and Oria, young princess, not yet sorceress, of the Barrans. I love that we get both sides of the story, so we know more than the other half o the characters know. That being said, that doesn’t mean we know everything. We only know what those two characters know, and seeing as they are both not yet in positions of real power, they are missing a lot. This is especially true of Oria. She has not yet achieved hwil, and so a lot of information is not given until this goal is complete.

Oria is a very interesting character. She lives in a tower, mostly secluded from other people in her walled city. Most of her company is her mother, Queen Rhianna and her familiar, a small dragon-like creature, named Chuffta. He rides on her arm or shoulder. His touch helps her to deal with excess emotions that she picked up from other people. He is also a great guide for her. He has a good head, even though he is very young too.

“You’re right. I apologize to both of you,”she added to her mother.
“What is Chuffta right about?” her mother asked.
“That I’m afraid of the Destrys without knowing any, so my logic is bad. Though there are plenty of stories and illustrations to inform that opinion.”

This is a very fun start to a series. Jeffe Kennedy did a great job worldbuilding and I love the characters. There are some characters, I didn’t like, but they weren’t supposed to be likable. This is also a great start to a story. I see a lot in store for Oria and Lonen. I’m very interested into diving into the second book in this series, Oria’s Gambit. If you haven’t tried Jeffe Kennedy, this is a great time to start.