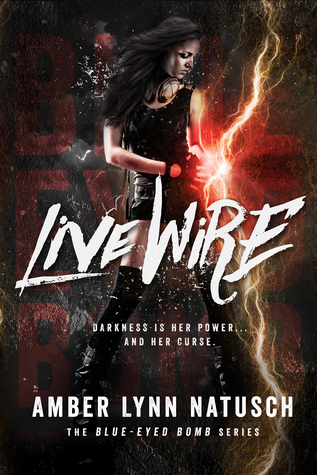 Sapphira is a ticking time bomb.

Two years ago, she lost control of the unstable energies within her and caused a horrific supernatural incident. Since then, she and her family have lived in constant fear of another—and her freedom seems only a distant memory.

In Huskers Grove, Iowa, a darkness looms. A great and faceless evil. An evil that wants Sapphira. Can she master her abilities to save the ones she loves or will she fall victim to the enemy that seeks to take what is rightfully hers?

Caged, by this author, is one of my favorite series. It ended, as all good things do, over a year and a half ago, and it was hard to say goodbye to all my favorite characters. Sean and Ruby were the main ones, and now they have an adult daughter named, Sapphira. And yes, this is a spin-off of Caged, and Sapphira is now the heroine. I was extremely pleased to receive this book from the author in exchange for a fair and honest review.

Sapphira(Phira)has a very dark energy inside her body. She has no control over it during any kind of strong emotion. A town in Colorado was razed to the ground along with all it’s residents the last time she lost control, so now she is not trusted by her family to do anything outside her home by herself. She lives with her two brothers, Nico and Alek, and she also has a bodyguard named, TS, who follows her everywhere. They are all members of the PC, a group that polices supernaturals by using immortal warriors. When the group gets sent to check out a town with a supernatural problem, Phira talks them into letting her go. Events happen and Phira ends up by herself on a farm in a rural area. There, she is taken in by Gabe, the owner of the farm. Due to spoilers, I am going to leave it at that.

I liked Sapphira as a character, and she is completely different from any other of the author’s characters from her other series. The darkness inside of her has caused her to do anything she can to keep it at bay, including having multiple sexual partners. Sex and playing her piano are the only things that keep her sane, and keeps everyone safe while around her. She is non-apologetic about it and doesn’t(?) care what her family thinks about her because it’s her only hope to keep everyone from getting hurt by her. It’s a major struggle for her, one that her family isn’t aware of. On top of that, she is full of snark and is generally a not nice person to be around. All since the incident in Colorado. Once in Iowa, by necessity, that all changes. Again, enough said. Gabe is a young farmer that is about ready to lose his farm. It doesn’t take him long to become pretty smitten with Phira, and actually, her with him as well. Gabe was perfect as a man who while wonderful to Phira, is also confused by her as well. I really liked his character and enjoyed seeing him fall for her. Phira’s father, Sean, shows up in this installment, and I will be waiting impatiently to see Ruby show up in future books.

While there is a romance, I consider this an urban fantasy. It remains to be seen what’s going to happen with Sapphira in the long run, and Amber adding TS into the mix as another possible love interest for Phira, only added to the story. Love triangle? Not yet, but who knows as we are just getting started with this series.

The author has employed a great deal of creativity in developing a new type of villain for Phira to face. Extremely scary, this new creature has a big arsenal of creative ways to mess with Phira at it’s disposal. And it certainly doesn’t shy away. Phira, as the product of two different sorts of supernatural characters, gave the author license to come up with a whole new entity in Phira.

A non-stop, less than one day read for me, this book blew me away with it’s new sort of supernatural main character, and the new kind of paranormal villain as well. I enjoyed the romance between Phira and Gabe, but the book was also full of suspense, and plenty of fast paced action as well. I found it to be very creative and well written, and because it was written by Amber, that didn’t shock me in the slightest.

I thought it was an awesome start to a new series and loved the whole thing. I highly recommend this to adult urban fantasy fans, ones that don’t mind a romance in their reads.