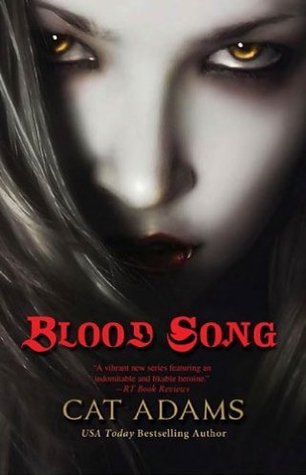 Bodyguard Celia Graves has definitely accepted her share of weird assignments, both human and supernatural. But her newest job takes the cake. Guarding a Prince from terrorists and religious fundamentalists is hard enough, but it seems like the entire supernatural world is after this guy too. When she is betrayed by those she is employed to help, and everything goes horribly wrong, Celia wakes to find herself transformed.

Neither human nor vampire, Celia has become an Abomination—something that should not exist—and now both human and supernatural alike want her dead. With the help of a few loyal friends—a sexy mage, a powerful werewolf, and a psychic cop—Celia does her best to stay alive. On the run from her enemies, Celia must try to discover who is behind her transformation…before it’s too late.

Me: Someone wise once told her that no human is a match for the monsters, magic or no magic, and the important things are “brains and good equipment.”

You: She got those things?

Me: It’d make for a pretty lame story if she didn’t.

And a short one.

While on a gig for a particularly royal disgusting client, she’s attacked by a vampire, who, inexplicably, decides to turn her rather than kill her . . . Which is weird, b/c (per an overheard conversation between Creatures) the whole point of the attack was apparently so that her DEATH would be blamed on some other vampire, for reasons we aren’t privy to.

Would-Be Master Bat is interrupted by the arrival the plot’s intended target and forced to flee before he can finish the process, leaving Celia passed out on the pavement.

She wakes up an abomination—their term, not mine. It’s rare, but when this sort of thing happens, the result is varying degrees of partial change.

In Celia’s case, this means fangs, an inability to digest solid food, heightened sensitivity to sunlight, increased strength, and a handful of other things, but her biggest hurdle is that even if she’s walking around in broad daylight . . . she looks like a vampire.

And having a convenience store worker panic at the sight of you and spray holy water in your face will ruin your whole damn day.

This is actually the third time I’ve read BLOOD SONG, and for awhile this series occupied one of my Top Five UF Series spots. Then no new installments for years, b/c “Cat Adams” is really a writing partnership that has since dissolved, so even though a new book is finally forthcoming, will it be on the level of its predecessors?

I don’t know. But I’m gonna find out. Hence the reread.

In the meantime, I very much enjoyed reconnecting with Celia and co., and I highly recommend the BLOOD SINGER series to all urban fantasy fans. The world is diverse and unique, the characters are well-developed, and the individual plot lines are more than entertaining. *whispers* If I’m being vague, it’s b/c there’s a significant Plot Twist about midway through the book, and it’s a kind of pivotal detail that’s pretty much the foundation of the rest of the series. I’m not going to ruin it for you, but trust me—it’s good. #spoilerssuck More details in next recap, I promise. *winks*