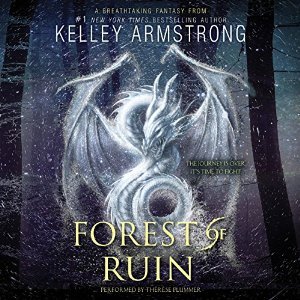 From #1 New York Times bestselling author Kelley Armstrong comes the breathtaking conclusion to the Age of Legends trilogy, perfect for fans of Graceling and Game of Thrones.

The empire rests on the edge of a knife, and sisters Ashyn and Moria are the handle and the blade. Desperate to outmaneuver the evil Alvar Kitsune, whose hold on the people grows stronger every day, Emperor Tatsu begs Moria to put aside past grievances and ally with Gavril—at least long enough to make an attempt on Alvar’s life. Meanwhile, reunited with her long-lost grandfather, Ashyn discovers that she is the key to a ritual that could reawaken an ancient dragon and turn the tide of the coming battle in their favor.

But with lies and betrayal lurking around every corner, Ashyn and Moria will have to decide once and for all where their allegiances are. And it may not be where their hearts would lead them....

In this breathtaking final book in her epic trilogy the Age of Legends, #1 New York Times bestselling author Kelley Armstrong blends fantasy, action, and romance to give readers the unforgettable ending they’ve been waiting for.

I’ve been struggling with reading books lately. My attention span is very low for some reason. I can’t really sit down and read for more than an hour before I start finding something to distract myself. So, I decided to try the last book in the Age of Legends series on audio instead of reading, like I did with the previous two books. This worked out really great. I was able to finally finish this trilogy without having to sit down and read in little bits.

If you’re not familiar with this series, it is a fun one. It is set in a world that does have magics and spirits, among other things. The stories are told from the point of view of sixteen-year-old twin sisters, Moria and Ashen. They have the abilities to calm spirits and even banish them. Moria is known as the Keeper. She helps protect the empire from angry spirits. She also has a bond-beast that is a wildcat named Daigo. Bond-beasts are warriors that have died and come back to help the Seeker and the Keeper. Ashen is the Seeker. He has a hound for her bond-beast, named Tova. Moria is the one that has always been more outgoing and popular with the people. Ashen has always been a little more introverted. The two girls have been separated for a long time now as they try to solve the issue of Shadowstalkers and find the missing children from their town.

There are also three guys who’ve been part of the story from the beginning, or almost the beginning. The first one that we met in the first book is Ronan. He is a fugitive from the empire. He is also castless, which is very important in this world. It also makes him keep his distance from Ashen, even though he has quite the crush on her. He doesn’t feel that he’s good enough. He also uses little brother and sister as an excuse to keep his distance. He is responsible for them, since they have no one else. But at the same time, he feels he needs to protect Ashen.

There is also Gavril. He is quite the magician, though not as strong as his father. He has also been branded a traitor. His father is not a good man has done many horrible things (I won’t go into details to avoid spoilers). There are several times where you can’t tell which side Gavril is on. He and Moria have become very close friends. She has even been branded a traitor because of her ties to him in friendship.

Lastly, there is Tyrus. He is the emperor’s bastard son. He is also the emperor’s favorite child. He has also been branded a traitor because of events that happened in the second book (once again, I won’t give further details). He has been traveling with Gavril and Moria.

This story continues where the second book left off. We go back and forth between Ashen and Moria telling their tale. Both are witness to horrors along the way. You can really see the two girls, and also the boys, all grow up and leave childhood behind as they face things that even humans shouldn’t have to face. There is betrayal from family members, witnessing the aftermath of horrible murders (truly, these murders were awful. The kids didn’t witness it, but they came across the bodies and even that was bad enough), dealing with the zombie-like shadowstalkers. They even had to deal with the idea of raising dragons from a magical induced sleep. Yep, you read that right, dragons have made an appearance (and no, neither of the girls went into a bonfire with eggs LOL).

I’m a huge fan of Kelley Armstrong. I think she writes amazing characters. Now this series is one that isn’t as fast paced as some of her other stories, but the characters and the world she has built is still pretty great. I like how she kept me intrigued with trying to figure out who is betraying whom and never knowing what type of horrors the girls would come to next. I will say that end the end, I enjoyed the overall series, more than I enjoyed each book. I think part of that is that Armstrong ended the first two books with cliffhangers (grrr), but this being the final book, that didn’t happen here. I thought the story wrapped up pretty well. I liked how the people whose names were cleared were able to convince the emperor of their loyalty without having the emperor lose face. I will say that there is a bit of a love triangle, but not a strong one. Moria had always knew the choice she wanted, though she did second guess herself from time to time. If you like high-fantasy YA stories, this was a fun trilogy.

Narration
I think this was my first time listening to Therese Plummer. I know I recognized her name. I would’ve sworn I had listened to her before, but I can’t find anything that could’ve been the book. Anyway, I thought she did a great job with narration. I loved how she was able to make the kids sound like the teenagers they were and the adults sound like adults. I thought she did a great job with the male and female voices and that you could really feel the horror some of the kids experienced through their voices. If you haven’t tried Therese Plummer, I highly recommend her. I will looking for more books by her.