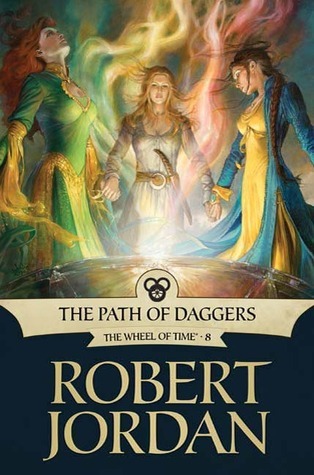 For millions of fans around the globe, the wait is over. Sequel to the international blockbuster bestseller A Crown of Swords, this epic volume continues one of history's greatest fictional journeys and the most extraordinary work of American fantasy ever published--The New York Times, Wall Street Journal, and worldwide bestselling series--The Wheel of Time.

The phenomenal tale that is mesmerizing a generation of readers now continues.

The Seanchan invasion force is in possession of Ebou Dar. Nynaeve, Elayne, and Aviendha head for Caemlyn and Elayne's rightful throne, but on the way they discover an enemy much worse than the Seanchan.

In Illian, Rand vows to throw the Seanchan back as he did once before. But signs of madness are appearing among the Asha'man.

In Ghealdan, Perrin faces the intrigues of Whitecloaks, Seanchan invaders, the scattered Shaido Aiel, and the Prophet himself. Perrin's beloved wife, Faile, may pay with her life, and Perrin himself may have to destroy his soul to save her.

Meanwhile the rebel Aes Sedai under their young Amyrlin, Egwene al'Vere, face an army that intends to keep them away from the White Tower. But Egwene is determined to unseat the usurper Elaida and reunite the Aes Sedai. She does not yet understand the price that others--and she herself--will pay.

About halfway through, I got super impatient, b/c #7 ends with him getting conked on the head, lights out, and, yeah, I know what happens next (b/c rererereread), but still, where the blood and bloody ashes is he? So I started flipping through the chapters, checking out the icons, looking for the tell-tale dice, and I FOUND THEM.

Don’t get me wrong, I like Talmanes as much as the next person, but Talmanes is NOT Mat.

I’ve already explained which type these are.

Aes Sedai shenanigans mean scheming and machinations. They mean HUBRIS. They mean ignoring the obvious b/c they know better, even when what they “know” has been definitively proven wrong over and over again.

1. The Black Ajah is a filthy rumor.

2. Being Stilled or Severed from the Source cannot be healed.

3. No more than a handful of men develop the ability to Channel every year.

4. Abilities like Traveling and creating new ter’angreal have been lost since the Age of Legends.

5. Only an Aes Sedai can inhibit another’s ability to channel.

FALSE, one and all.

And admittedly, there are few Aes Sedai who are privy to ALL the contradictory information, but most know at least half, and still, when confronted with undeniable evidence of yet another falsely assumed belief, they refuse to acknowledge the possibility that they’re mistaken until concrete proof is waved under their noses, and even then they pick it apart, b/c not convinced.

Even more so when the logical and inevitable conclusion of the actions they’ve taken results in physically becoming sick and wails and denials.

“We’ve divided the Tower b/c usurper and blatant abuse of the spirit of the law, gathered over 30k soldiers for our army, and acquired one of the most respected Generals in our world, but actually returning to the Tower with our army and our General to start the war we’ve been planning . . .?” *throws up messily in corner*

And that’s just the Aes Sedai who Egwene’s stuck with.

The Aes Sedai/Kin/Windfinders with Elayne and Nynaeve’s group are a whole separate irritation.

But in that case, Elayne is the bigger annoyance. Whether she’s doingthething she shouldn’t be doing, b/c if Aviendha can do it, the Daughter Heir of Andor can do it, too, or making meaningless connections while missing the obvious and IMPORTANT ones, I wish this red-haired future queen was a Red Shirt, and good riddance.

There is more to THE PATH OF DAGGERS then a lack of Mat, Aes Sedai shenanigans, and Elayne-whom-I-hate-loathe-despise-and-abominate.

2. The reappearance of Elyas, who gives Perrin some much needed insight into the minds of Saldean women.

4. TWO revelations: View Spoiler »gholam are most likely part Aelfinn/Eelfinn (b/c human blood has the sweetest “savor,” and Mistress Anan is almost certainly a former Aes Sedai who was burned out, specifically, Martine Janata, the last Aes Sedai to make a study of ter’angreal. « Hide Spoiler

So not all bad. But no Mat and too much stupid Aes Sedai nonsense, so not my favorite, either. Read it b/c it’s necessary, then move on, is my advice.

ALSO, I’ll be keeping a spoiler-tagged record of the various bits of prophecy, Min’s viewings, etc. that accumulate along the way at the bottom of my Goodreads review. FYI.