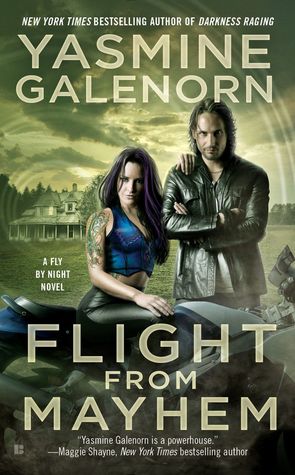 I'm Shimmer, a blue dragon shifter. Thanks to a mistake, I was exiled from the Dragon Reaches and sentenced to work for gorgeous, exasperating Alex Radcliffe, a vampire who owns the Fly by Night Magical Investigations Agency. Every time I turn around, somebody's trying to kill us. But you know what they say: All's fair in love and bounty hunting...

A serial killer is stalking the elderly Fae of Seattle, draining their bank accounts before brutally murdering them. When Chase Johnson asks for our help, Alex and I discover that the sociopath is also a shifter—able to change shape to match his victim's deepest desires. Our friend and colleague Bette volunteers to act as bait, but the plan goes dangerously awry. Now, unless we find her first, she's about to face her worst nightmare.

It’s another adventure for Shimmer, the blue dragon shape shifter, and her boyfriend, Alex, her vampire boss. They both work for a supernatural detective agency in a world where humans know that supernaturals exist side by side with them. Well she works there, he owns the business. Also along for the ride are Bette, the secretary extraordinaire-and an ancient snake like shape shifter, and werewolf computer genius, Ralph. Shimmer is still under a sort of parole with the dragon realm after causing some trouble. Because of this, she was given to Alex’s supervision(parole)until the realm sees fit to call her back. Only Shimmer is really starting to like it on the earth plane, with the exception of only being able to shift to dragon while in deep water. And, on the earth plane she has friends that are like family and of course, Alex. In the first installment, Flight from Death, we also met Tonya, a powerful witch. I liked her character a lot and hoped to see her again, so I was happy to see her back for this book, even though she lives a decent ways away. And Chai, a djinn, is still Shimmer’s roommate, and it seems he has his eye on someone he likes…He also happens to be one of my favorite characters of this series.

A supernatural serial killer is at large and when a friend of Bette’s disappears, they all fear the worse. It’s up to the group to try and find Bette’s friend, and get rid of the killer. I thought that was an interesting premise, but the author threw in a couple of other threads just to keep things interesting. Glenda, Alex’s crazy succubus ex, has decided that since she can’t have Alex, than no one can, and sets her sights on making Shimmer’s life hell. And rounding out the premises is the house across the street from Shimmers. It’s haunted and Shimmer makes the acquaintance of a motherly ghost who seems sweet. But there’s an evil spirit living there as well. Or is the woman not so sweet after all?

As with the last book, I enjoyed each of the characters. The premise’s were good, but to be honest, it was really reminiscent of the last book. Not that there was the same supernatural problem. Just a different one, and one that the whole team came together to solve, as before. Almost bordering on formulaic at times. Of course, the author has added to the story. I liked getting to know more about Bette, although there’s something else about her that the author is keeping under wraps. I thought Chai falling for someone was sweet and added to his story. Alex and Shimmer’s romance heating up was something else I enjoyed. And, Ralph’s got a major problem, one that didn’t get resolved. I guess I just wanted more. I wanted to see more of Shimmer as a dragon. More about her life in the dragon realm. More of Alex’s back story would have been interesting to me as well. More resolution to different threads of the story would have gone a long way towards making me love this book. It dragged a bit for me even with everything that was going on, and I ended up spending a lot more time reading this one than I did the first installment. Which translates to me putting it down and reading other things at times.

I do plan on reading the next book because I like the characters and I want to see how the author resolves all my unanswered questions about all the left undone threads. To be honest, I think I enjoyed the first book more. I recommend this to adult UF readers.

I received this book from Net Galley in exchange for a fair and honest review.