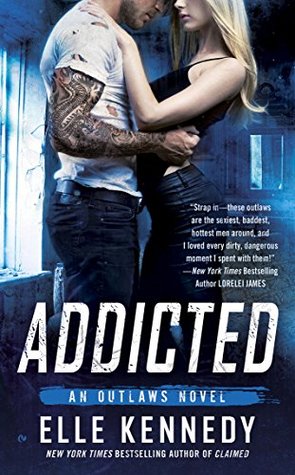 Lennox used to live in a paradise on earth with his best friend Jamie, in a place where visitors came and went, allowing their desires to run free. But everything changes when a deadly attack forces them to take up with Connor Mackenzie’s band of Outlaws. Lennox knows Jamie is hung up on someone else, but he’s always believed he’s the man for her—and won’t let her go without a fight.

Even though Jamie is well aware that Lennox is one hot specimen of a man, she refuses to let sex ruin the most important relationship in her life. But when the object of her interest spurns her, she indulges in a little pleasure-filled revenge with her very magnetic, very willing best friend. One thrilling night with Lennox is enough to awaken Jamie’s unexpected desires for him. And now that she’s had a taste, she’s not sure she can ever give him up...

ADDICTED, the second installment of Elle Kennedy’s OUTLAWS series, picked up where the last book left off.

The survivors of the Enforcer attack on Lennox’s den of iniquity have relocated to Conner’s compound, with Lennox and co. struggling to adapt to a more rigid lifestyle.

Oh, they still have ALL the free and shared love, but their movements are restricted (secret compound location is secret), and Conner makes unilateral decisions b/c Conner.

Fortunately for Lennox, Reese calls in the favor she’s owed in the form of Pike and Rylan going to her settlement for a month and teaching her people how to defend themselves, which prompts Conner to send Kade as well—the newest member of his badass squad needs to work on his hand-to-hand fighting skills—roping Lennox in as well to keep an eye on him.

And while he resents being ordered to go, Lennox doesn’t argue b/c cabin feverish.

Unfortunately, the whole thing was pretty MEH for me.

The compelling plot line that keep ALL the sex from becoming tedious in CLAIMED was sadly absent in ADDICTED.

In fact, there wasn’t much of a plot at all.

It was mostly, “Lennox does really stupid shit after ten drinks,” Lennox having nine drinks, and oh, hey, now’s a good time to act on the blistering attraction I’ve stifled for, oh, twenty years, b/c drunk.

Oh, wait! The reasons Jamie knows about Lennox’s ten-drinks-drunk is b/c she’s observed it at regular intervals during a great many of those twenty years.

But whatever. This time’s different.

And now that they’ve finally acted on their long ignored lust, they get to start freaking out. B/c miscommunication and false assumptions and MEH.

I still have hope for the series—CLAIMED was fantastic—but ADDICTED is a clear case of Second Book Syndrome. I felt like I was rereading every other friends-to-lovers romance I’ve ever read, and not even the dystopian nature of the OUTLAWS world could make it more interesting, b/c the setting was barely part of the story. BUT. Next on the dock is my shiny ARC of RULED, so wish me luck . . .