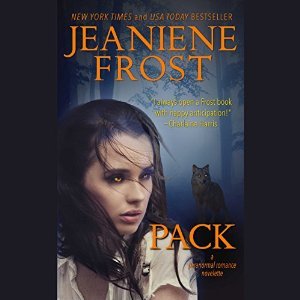 Lost in the woods...

Marlee Peters is tired of putting her dreams on hold. So when her friends can't continue on a long-anticipated hike through Yellowstone National Park, she goes on without them. But Marlee isn't alone in the woods: She is being hunted by a pack of frighteningly intelligent wolves. When a fight for survival takes an impossible turn, Marlee realizes that the enigmatic stranger who saves her might be her dream come true - or her waking nightmare.

As the pack's enforcer, Daniel has sworn to keep the existence of werewolves a secret. He knows that Marlee's bites may change her life in a way she can't imagine, but if they don't, he can't let her tell others about his race. Yet Marlee is awakening Daniel's most primal urges, and soon neither one of them will be able to resist the call of the wild.


I’ve had a love affair with Jeaniene Frost’s vamps for years, and the titles in her NIGHT HUNTRESS WORLD Paranormal Romance series provide some stiff competition for her Urban Fantasy novels, so adding werewolves to her writing cocktail was the next logical step. PACK previously appeared in two anthologies, but the addition of 20% more material, and of Tavia Gilbert’s voice were the deciding factors in it moving to the top of my to-be-read pile.

The author covers a lot of ground in this novelette from Marlee’s turning, to her coping with her new reality, to accepting Daniel as her mate. All of this made for a fully-loaded story which is hard to believe considering that the audio’s total run time is only one and a half hours. I really felt for the heroine for having the courage to chase after a lifelong dream, and for the pack’s enforcer for knowing when to push and when to hold steady.

Tavia Gilbert has narrated all of Frost’s books, so I knew that listeners were in extremely capable hands with this latest addition to her repertoire. This adventure is told from Peters’ perspective, and the reader smoothly captured the wide range of emotions that the protagonist experiences. The voices and inflections that she used for the other characters were equally stunning. And, of course, one mustn’t forget the bonus sex scene!

PACK was (hopefully) Jeaniene Frost’s way of opening the door to a world of shifter possibilities.