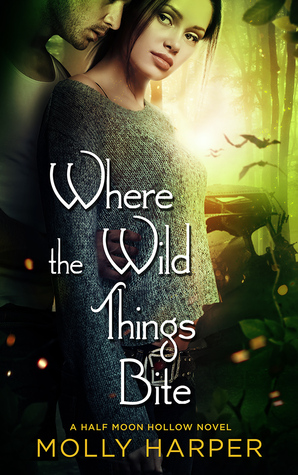 Delivering a rare book to a valued customer is definitely part of mild-mannered archivist Anna Winthrop's job description. You know what isn't? Protecting her precious cargo from mid-flight theft by the very pilot who is flying her to Half-Moon Hollow...while trying to appear as unappetizing as possible to the only other passenger, a vampire. Undead bookstore owner Jane Jameson could be waiting a very long time for her book. Possibly forever.

Fortunately, Anna's dashing fanged companion Finn Palmeroy helps her fend off the attack, but not before their plane crash lands in the forest hundreds of miles from civilization. Great, now she's stranded with a priceless tome and a rakish vampire whose bedtime is fast approaching. Why does everyone want this book so badly, anyway? Anna just wants to get it to Jane before Finn decides to turn her into dinner-or sweep her off her feet. Okay, the second option is really tempting. But they're not out of the woods yet...

I liked WHERE THE WILD THINGS BITE because even though it takes place in the HALF MOON HOLLOW universe, and familiar characters pop-in, neither Anna or Finn are part of Jane Jameson’s gang, so it also provided a bit of a different spin on Molly Harper’s best-selling series. Most of the story took place in a forest as opposed to the usual small town setting which added to this installment’s unique appeal as well.

The author once again sucked me in with a few bookish elements, and by leaving the heroine stranded in a remote local with a dashing vampire. Unfortunately for Winthrop, Palmeroy’s no cabana boy, and the backwoods of Kentucky are a poor substitute for a deserted island. On top of putting their survival skills to the test, there’s also a crazy pilot and a group of shapeshifters after Anna’s priceless package.

All of Molly Harper’s protagonists have their quirks, and Anna was no different with her agoraphobia, and the subsequent anxiety that accompanies this disorder, not to mention she’s a bit of a germaphobe. So, crashing into no man’s land was pretty much Anna’s worst case scenario. I feel like a meanie admitting that I got a kick out of her misery, but I really did enjoy watching her come out of her shell when confronted with her worst fears.

Finn was a complicated character; on one hand he saved Winthrop from death by plane, and several more times from those that are hunting her. However, he’s also pretty darned sketchy. Jane doesn’t like him, he’s had run-ins with the council, and his loyalties change faster than the tide. Anna possibly ending up as his dinner is the lesser evil considering all of the black marks against him. Still, he’s not all bad.

WHERE THE WILD THINGS BITE was a perfect fit for Molly Harper’s HALF MOON HOLLOW series.

5 responses to “Review: Where the Wild Things Bite by Molly Harper (@mollyharperauth, @Pocket_Books)”