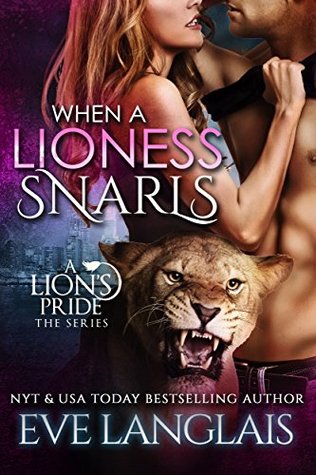 Stalking is only a crime among humans. In a lioness’s world, it’s called dating.

Jeoff, is a bit of a killjoy, a super cute one who gets furry on full moons.

But so does she.

Luna is everything Jeoff is not. Outrageous, outgoing, and violent. Very violent, and unafraid to go after what she wants—and she wants Jeoff.

Silly man, he thinks he can resist, but once a lioness sets her sights on a man, paws off! And if anyone thinks to try and take him… There’s a reason why the ladies of the pride win the yearly award for Baddest Biatches.

Stalking is only a crime among humans. In a lioness’s world, it’s called dating.

Luna finally got her own story. I’ve loved Luna since book one. She started off as a fairly small secondary character in book one, but continued to grow as a character as the books went on. She is sorta like the leader of the lionesses in Arik’s pride. All the lionesses are known for their own level of crazy. The don’t really believe in rules and they love to be involved in the fights and Luna is the ringleader of the group.

Jeoff is the leader of the local wolf pack. Since the pride was bigger, Arik was the head ruler of all shifters in the area, but Jeoff was in charge of the wolfs. Jeoff was also the leader of the firm that provided security for the pride. When he comes home to find a naked Luna sunbathing on his apartment floor, he learns that in addition to some of his pack missing, the pride has had some couples go missing. Luna is going to help Jeoff track down where and what happened to the missing shifters.

Jeoff is quite the prude. Luna even refers to him as such on many occasions. He is also very orderly. He is what I might call a “stick in the mud” if you caught me on the right day. However, after spending some time with Luna, he does start to loosen up, even if he fought it every step of the way. He has always dated humans, because according to him, “They cause less drama.” He really doesn’t want to date a lioness, no matter how much he is drawn to the crazy cat.

While Jeoff and Luna are tracking down what happened to these missing couples, they are led to a new nightclub that caters to swingers. Needless to say, they both have different leaves of excitement for checking out the new club. Arik orders Jeoff to go because he doesn’t want Luna going by herself and she was going to go no matter what anyone said. There they meet Gaston Charlemagne. He is the owner of the club and something doesn’t smell right with him.

There is some suspense as they search for the missing shifters. Luna is about kidnapped herself. There is something off with this club and Charlemagne. We meet a new type of shifter, which I really want to learn more about.

The romance is fun, too. Watching Luna finally pull Jeoff slowly out of his shell. Not to mention, watching Luna realize that this will become a long term relationship. Eek! The sex is hot. The quotable quotes are off the charts again. I had a hard time picking which ones to share with you. You just never know what is going to come out of Luna’s mouth. LOL

I’m really excited to get to Reba’s story. I just love the lionesses. They are the most fun in this series. It will be interesting to see who she is paired up with.

“Has the chef at your condo been putting cat nip in the muffins again?”
“No.” Her lips pulled down in a pout. “Apparently it’s a gateway drug to squeaky mouse toys and drinking all the cream?”

“I thought you said it was empty.”
“It is, but given the scene is still rather fresh, I want you to check it out, you know, put that nose of yours to use.”
“I don’t have to be naked for that.”
“Well, then, your wolf is going to look mighty funny running through the woods in your tightie-whities.”
He finished slapping his sandwich together. “You know, iit’s times like this that I remember why I hate dealing with lions.”

Hello, my name is Eve and I am a Canadian author who loves to write hot romance, usually with hot shifters, cyborgs or aliens. I should warn you that I possess a twisted imagination and a sarcastic sense of humor something I like to let loose in my writing.

I love to write, and while I don’t always know what my mind is going to come up with next, I can promise it will be fun, probably humorous and most of all romantic, because I love a happily ever after.

Thanks so much for coming by and checking me out. If you’d like to know more, read some excerpts or find out what’s coming next, then please visit me at http://www.EveLanglais.com

22 responses to “Review: When A Lioness Snarls by Eve Langlais (@mlsimmons, @EveLanglais)”