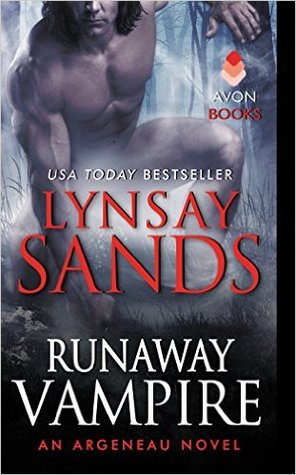 Dante Notte has heard it said that love hurts. He just wasn’t expecting it to run him over in an RV. Still, a punctured lung and broken ribs are nothing compared to the full-body shock he feels whenever he’s near the vehicle’s driver, Mary Winslow. He needs to keep her safe from their pursuers while he rescues his brother. Most challenging of all, he needs to claim this smart, stubborn woman as his life mate.

The naked, injured, insanely gorgeous younger man who clambered into her RV insists they belong together. If Mary wasn’t feeling their incredible connection in every inch of her being, she wouldn’t believe it. But now that the men who took Dante’s twin are after her too, trusting her gut means risking her life for an immortal who’s the very definition of a perfect stranger.

I have so many want to reads and so many have to reads, that I rarely see a book that’s not even on my radar, buy it, and immediately read it. That’s what happened to me with this one. It’s my first by Lynsay Sands, an author I have heard of many many times. I just didn’t know how much I was going to love this series. And therein lies the rub with me. The Argeneau vampire series has 24 installments so far. That’s daunting to many readers and to me as well. But when I read the blurb for this one and it was on sale, I had to try it. I am happy to say that I enjoyed the whole thing, and as far as I am concerned, this one can standalone. Of course there are other characters that you know are involved in the series, but it never once gave me pause to think that I was missing something.

Mary is sixty two(yes, you read that right!), a grandmother, a Canadian, and is on her way to a favorite campsite in Texas, when a naked man runs into her RV. Of course she doesn’t realize what she hit at first, but from the second she lays eyes on the man, she is attracted. Attracted yes, but not insane. The man, named Dante, could almost be a grandchild with the difference in ages! He tells her a story of being kidnapped with his twin. He was able to escape, but the kidnappers are after him, and now her, because he is in her RV and they know it. He neglects to tell her that he believes her to be his life mate, because he can’t compel her or read her mind. Mary is not a cougar that’s for sure, but he sure does fit the bill for some sexy dreams. Also known as a symptom of being a life mate. But they are on the run with kidnappers hot on their heels, so this book took off in a flurry of action and for me that can’t be beat when starting a book like this.

This was such a fun read. I knew when I started laughing just a little of the way in, that I was going to love this book. Poor Mary, and all her insecurities about her old body, and her dangerous thoughts about Dante, drew me in and didn’t let me down. The kidnapping and being threatened(and shot at) was just the icing on the cake for me. On Dante’s part, he’s way older then Mary, but looks about twenty five. He’s Italian, and oh yes, an immortal of the vampire type. The person he is closest to in the world is his twin, and he is determined to get him back. I never thought I could ever stomach sexual chemistry between a sixty two year old and a twenty five year old-either gender-but this wasn’t a problem for me. If you read the book you will understand why as it’s not some sleazy weird pairing to me. There’s reasons! Good ones.

This was funny at times, with it’s share of drama and tension, but is most notable for its good romance. Mary, backpedalling from him, with Dante, pursuing her was just fun. Especially when they keep getting interrupted. We meet others from his group of hunters, as they are called, and I enjoyed getting to know them. Now I would like to read some of their stories as well! They are headquartered in Toronto and through a series of events, the action moves to that city.

I highly recommend this book to paranormal romance readers. Even if you don’t want to get involved with a series with this many books, you wont have a problem reading this one. On my part, I have already bought book one, A Quick Bite, although I know it’s highly unlikely I will get through them all. Hey, it never hurts to try!