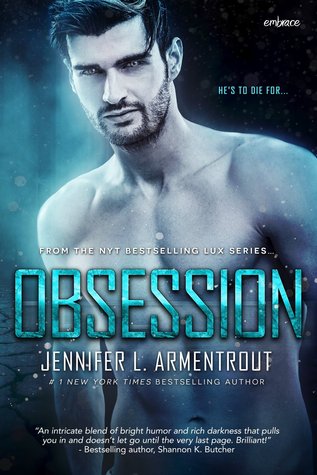 Hunter is a ruthless killer. And the Department of Defense has him firmly in their grasp, which usually doesn’t chafe too badly because he gets to kill bad guys. Most of the time he enjoys his job. That is, until he’s saddled with something he’s never had to do before: protect a human from his mortal enemy.

Serena Cross didn’t believe her best friend when she claimed to have seen the son of a powerful senator turn into something...unnatural. Who would? But then she witnesses her friend’s murder at the hands of what can only be an alien, thrusting her into a world that will kill to protect their secret.

Hunter stirs Serena’s temper and her lust despite their differences. Soon he’s doing the unthinkable breaking the rules he’s lived by, going against the government to keep Serena safe. But are the aliens and the government the biggest threats to Serena’s life...or is it Hunter?


The Lux series by Jennifer Armentrout is one of my favorite all time series. Imagine my surprise when I found this book recently, as I didn’t know it existed. While the Lux series is young adult/borderline new adult, Obsession is the grown up book about these two other worldly species, with a focus on the Arum. Arum’s are the Luxen’s mortal enemy and until now I thought there wasn’t anything redeeming about them as a species. Just goes to show that there are two sides to any story. Of course, now I know that there isn’t much great about most of the Luxen either, and this book sure highlighted that.

When Serena’s best friend Mel’s night with a senator’s son backfires and she witnesses the impossible, she tries to tell Serena all the details. Serena is just short of thinking her friend had slipped over into some sort of a mental problem, when she too witnesses the impossible. Now Mel is gone and Serena is on the run with an Arum named, Hunter. Seems she has seen too much, and the government wants her hidden and uses an Arum to do it, because the Luxen are the villains in this story.

Serena is the epitome of a normal young, and single, career woman. She has a nice life and lives in Colorado. I liked her, but she did have her share of too stupid to live moments, and I wanted to slap her upside the head at times. How many times does your protector have to tell you that you are surrounded by danger and not to do anything stupid? Apparently more than a few, if you are Serena. Hunter was the epitome of a the quintessential bad boy. He’s one of the bad aliens, as far as the government is concerned, although he is employed by them, and he’s not into treating Serena that good-at least not at first. Babysitting isn’t his thing, and he’d just as soon kill her off instead, problem solved. No, he’s not very nice at all.

Romance? Absolutely. Extremely hot sexual encounters? Off the hook. But it does take awhile to get there. This story was mostly about the two being on the run, with some time spent at out of the way places. There’s some suspense, some really bad villains, and of course, some murders as well. I really enjoyed seeing how Hunter grows as a person(?), from being bad, to someone that actually cares about someone else for the first time. Serena and Hunter go from being at complete odds to relying on each other-granted Serena has to rely on Hunter the most. And that was growth for Serena as well. She goes from being scared to death of him as an alien, to realizing that he isn’t so bad after all.

With the exception of a few times that nothing much is happening, I did like this book. It will never be my favorite of the books that take place in this world Ms. Armentrout created, but it was a worthy entry, I thought. And really for me, the Lux books are so wonderful, I couldn’t imagine this one being better than those. It is fun seeing the world from the Arum’s perspective, instead of despising them, as the reader is meant to in the Lux series. If you are a fan of this world by Ms. Armentrout, I highly recommend this book to round out your experience with the series. Even if you haven’t read them, this can still standalone as a good adult alien/human romance. And yes, there are a few times that characters from the Lux series do cross over into this one, but nothing major.