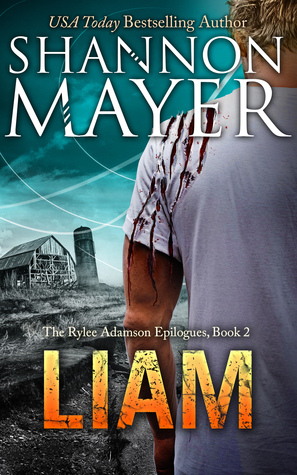 My name is Liam, and I was an FBI agent, until I stepped into the world of Rylee Adamson. Now, I’m a Guardian, a wolf shifter whose very design is to protect those around him at any cost.

The battle against Orion is done, the demons banished. In their wake, there are so many innocents who have lost their lives, their families, and their way.

Three of them our now ours to raise—the ogre triplets. Three boys I’ve come to love as if they were my own. And they are dying.

In a race against time, I must do the impossible. Find a female ogre willing to help us save the boys. A female from a species we had believed was wiped out.

There is one reclusive tribe left—but they aren’t sharing anything but death.

If I am to save my boys, I must face them down; and this time I must look inside myself and find a strength I did not know was possible, without Rylee at my side. If I fail, I fail not only my boys.

I may fail the world.


LIAM has progressed from a human FBI agent, to a werewolf Guardian, and beyond, but like Rylee, he’s had minimal opportunity to adjust to these transformations because inner reflection is the last thing on anyone’s agenda when the fate of the world hangs in the balance. The RYLEE ADAMSON EPILOGUES are giving Shannon Mayer’s characters the freedom to finally come to terms with their new roles through their own POVs.

O’Shea has undergone the most dramatic evolution of all of this world’s cast because he started the RILEY ADAMSON series on the opposite side of the law, made the jump to becoming part of the supernatural community, and now he doesn’t even recognize the face looking back at him in the mirror. I loved Riley’s story in the first installment, and no doubt I’ll feel the same about Pam’s in book 3, however Liam’s was extra memorable.

I enjoyed Levi’s contribution to this adventure because although readers met him in the last novel, he was still a mostly unknown secondary. Mayer really took the time to flesh him out well by having him be the hero’s sole ally on this quest. He got to put his recently discovered Elemental abilities to the test, learned what it means to have someone’s back, and in doing so became a valuable member of the team.

The plot line of this volume will tug at your heartstrings because even though it wasn’t of the same magnitude as say the apocalypse; three babies’ lives are in jeopardy, and for me that was a more relatable crisis than the former which made the stakes feel all the more urgent. We also got to connect with another Guardian, and see how the humans are dealing with the after-effects of the previous series’ finale.

LIAM was O’Shea’s time to shine, and shine he did!