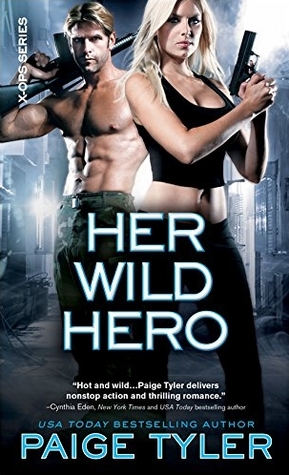 Name: Kendra Carlsen
Rank: Trainer, Dept. of Covert Ops
Objective: Get out of the office and into the field

The steamy Costa Rican jungle brings out the bear in Declan MacBride when he and new operative Kendra Carlsen are ambushed. In the midst of relying on each other to survive, and fighting his explosive attraction to Kendra, this shifter is about to lose control...

I’ve really enjoyed this series so far, and this book was no exception. DCO is a secret government agency hidden within the Department of Defense and Homeland Security. It filled with a group of shifters and humans, usually former military, who go out on missions that are out of the league for the local police and military. In this world, shifters are not known about by the general populus. And, shifters don’t generally shift fully into their animal.

The DCO uses these shifters for their own purposes. There are many different feelings about them at the upper levels. Some people feel that this is a bad idea and that these shifters are just a danger. Others feel that the shifters have rights. Either way, the teams generally consist of one shifter and one human. If the shifter becomes compromised, the human is supposed to put the shifter down and prevent any information from getting out about them. While the shifters tolerate this rule, they are not a fan of it as you can imagine. They also don’t really allow for “forinacating” between the agents.

Kendra has been in the books since book one. She isn’t an agent, but more of an office person. She is a trainer and writes up a lot of information about the training that is done for the teams. When she went out to help Landon and Ivy (the couple from book one) fight some hybrids (man-made creations that made with shifter DNA), she has wanted to go back out in the field. She finally convinces them to send her out on a training mission to Costa Rica.

Declan is a former forest ranger and a bear shifter. He has never really accepted his animal side. Because of this, he doesn’t have access to his full abilities. He has also had quite the crush on Kendra and has asked her out several times since he came to DCO. She always turned him down. He has finally given up on ever having more than just a passing friendship with Kendra. Of course, that is when she finally sees what’s in front of her.

The team arrives in Costa Rican jungle for a training mission only to come across some hybrids. There was no known hybrid labs in the area and these hybrids are different from the other hybrids that they’ve fought in the past. Things go all sorts of wrong.

This story is another great addition to this series. Not only do we have this romance, which was fun to read as they finally come together. But there is a ton of action. We also get to spend a lot of time with some of the characters we’ve met throughout the series. I loved watching Declan and Kendra come together. I loved watching Declan finally embrace his animal side. I also like seeing how he outsmarted these more intelligent hybrids. If you haven’t tried this series, I highly recommend to anyone who is a fan of paranormal romance or urban fantasy.

Angelo leaned forward and handed him the pack of cheese Tanner had given him. “Here, take this. Everything tastes better with MRE cheese on it.” Landon shook his head as he stood up and adjusted his NVGs. “I think there’s a T-shirt somewhere with that slogan on it.”

The military was good at a lot of things—killing people and breaking things being at the top of the list—but taking care of soldiers who couldn’t fight anymore wasn’t one of them. Veterans like that usually ended up on the street, where they didn’t fit in and weren’t understood. If the Veterans Administration safety net didn’t catch them—and there were a lot of holes in that net—they ended up like Tanner. Alone and on their own.

“Okay, I’m not sure how much this will help, but if I were you, the first thing I’d do when I got back would be to show up at her door with a gift of some kind,” Angelo advised. “Flowers. Chocolates. Hell, I don’t know—a plush tree sloth if you can find a store that sells them. Anything like that. Then make sure the first words out of your mouth are, I’m sorry for making you worry. Women like a man who can apologize when he’s wrong.”