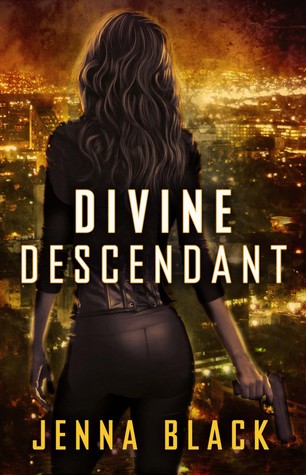 What happens when fertility goddesses go on strike? Nothing much—except maybe the end of the human race.

When private investigator Nikki Glass became immortal as a descendant of Artemis, she never dreamed she’d find herself playing marriage counselor to the gods. But she doesn’t really have much of a choice when the crazed ex-wife of Anderson Kane—a god in disguise who just happens to be the son of a Fury—decides to enact revenge by wiping out all of humanity. Somehow, Nikki must convince the two to kiss and make up, but with Anderson now gone AWOL, she'll have to find him first. To top it all off, the cat’s out of the bag that Anderson killed Konstantin, the Olympians’ deposed leader. Now their new boss—Konstantin’s son—is out for blood.

With every mere mortal’s fate now resting in Nikki’s hands, can she outsmart the gods…or will she be doomed to spend the rest of eternity in a barren and desolate world?

Finally, we have a book four in the Nikki Glass series. I’ve been waiting three years for this book to come out. I can say that I’m glad that this story is finally out in the world. After the long wait, I went through earlier this year and did a revisit of this series (and reviewed since I read these way before I was blogging). I’m really glad that I had the refresher. This book start where Rogue Descendant ends and it ended on a bit of a cliffhanger, so I was glad to see the story take shape quickly.

Nikki is an immortal and a PI. As a descendant of Artemis, she is great at finding things, not to mention has flawless aim with whatever her weapon is. She is coming to terms with her new life. Anderson, the leader of the “good” Liberi is MIA after killing the leader of the opposing and less friendly Liberi group, known as the Olympians. Problem is that Konstantin had a failsafe to protect him. He knew Anderson’s secret, which is a big one. When Konstantin is killed, his failsafe goes into action and Anderson’s very large secret is unleashed upon the world. Nikki is hoping that Anderson is working on solving any ramifications of the secret that is out in the world. However, she doesn’t know for sure.

Also, a woman shows up at the mansion and has even more of Anderson’s secrets. Anderson is someone who isn’t as “good” as he had lead them to believe. All of the Liberi walk a line between good and evil. Anderson’s Liberi lean more towards the good side. After hearing about Anderson’s past, they start to question things even more. This woman is the sister of Anderson’s ex-wife. Needless to say, she is not happy to find out that Anderson is still alive and she is willing to destroy the entire human race to hurt him.

Maybe Niobe’s problem wasn’t so much that she was angry but that she was batshit crazy. I’ve never met anyone with taste in women as epically bad as Anderson’s. If he had a thing for crazy women, couldn’t he have at least stuck to ones who weren’t homicidal.

Another great part of this story was the relationship between Nikki and Jamaal. This is a relationship that has be slowly building since the first book. Well, it finally makes some forward process. Jamaal has issues from his past that have really kept the relationship from making any progress. His past as a slave and the one mistress that owned him and enjoyed his scars and forced sex from him really did a number on him. Add to that the stress of his death magic as a descendant of Kali, makes him quick to get angry. Although him finding Sita, his tiger which is a manifestation of his death magic has helped him with his stress, she is a jealous tiger and doesn’t like Nikki. Sita and Nikki have a heart to heart, as much as you can with a magic tiger who can’t talk, but thinks on a higher level than a normal tiger. They learn to deal with each other so that they can both make Jamaal happy.

“I’m surrounded by the dead in the middle of the night hoping to pull a previously unknown power out of my ass. What could possibly go wrong?”

“You, however, couldn’t look harmless if you had flowers in your hair and were carrying an armload of kittens. And that face you’re making proves my point.”

This series continues to have wonderful characters and a great premise. I also love the action that goes on this book. There aren’t a ton of fight scenes that you see in some urban fantasy series, but it does have some great suspense that kept me glued to my Kindle.

Jenna Black wrote this where it could be the end of Nikki Glass or where she could continue the series. I for one and hoping that the series has a few more books. I would love to see where Nikki goes from here. If she decides that she isn’t going to continue the series, she did leave it at a place where I could be happy with the series. You can voice your opinion as to whether the Nikki Glass series should continue on Jenna’s website (I’m not sure how long she is taking feedback, but it was open when I posted this review).