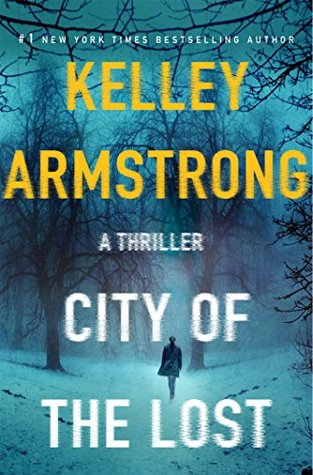 Casey Duncan is a homicide detective with a secret: when she was in college, she killed a man. She was never caught, but he was the grandson of a mobster and she knows this crime will catch up to her. Casey's best friend, Diana, is on the run from a violent, abusive ex-husband. When Diana's husband finds her, and Casey herself is attacked shortly after, Casey knows it's time for the two of them to disappear again.

Diana has heard of a domestic violence support town made for people like her, a town that takes in people on the run who want to shed their old lives. You must apply to live in Rockton and if you're accepted, it means walking away entirely from your old life, living off the grid in the wilds of Canada: no cell phones, no Internet, no mail, no computers, very little electricity, and no way of getting in or out without the town council's approval. As a murderer, Casey isn't a good candidate, but she has something they want; she's a homicide detective, and Rockton has just had its first real murder. She and Diana are in. However, soon after arriving, Casey realizes that the identity of a murderer isn't the only secret Rockton is hiding - in fact, she starts to wonder if she and Diana might be in even more danger in Rockton than they were in their old lives.

An edgy, gripping crime novel from a bestselling urban fantasy writer, City of the Lost boldly announces a major new player in the crime fiction world.

No matter how great our love for Kelley Armstrong, here at Rabid Reads, CITY OF THE LOST, superficially isn’t a book we’d ordinarily review.

It’s like that random episode of SUPERNATURAL where creepy mountain people are kidnapping athletic men in their late teens to early twenties, playing their own toothless version of THE MOST DANGEROUS GAME. No demons or witches or werewolves necessary for that plot line, humans were enough all by themselves.

CITY OF THE LOST is more subtle than that, but the principle is the same. Rockton, the “city” in question, is a place where people who need to disappear can disappear—for a fee—an idea that our heroine detective Casey Duncan initially mocks as an urban legend.

Not everyone who applies to disappear into Rockton is granted access, you see, and people with applicable skills are given preference—it’s a very small town, a settlement, really, population numbering around 200. Every person must fulfill a vital or at least necessary role.

You: Why does this tiny, tiny town very badly need a detective?

Me: B/c Rockton isn’t some sort of uptopia, and culprits need to disappear far more frequently than their victims.

You: EEP. A super secret town of criminals-in-hiding??

Me: Eh . . . Maybe that’s oversimplification, but yes. Criminals whom “the council” feel aren’t high risk for repeat offenses and victims fleeing their abusers, all in the middle of 500k acres of frozen Yukon Territory, and surrounded by “residents” or comparatively nonviolent, unless provoked, mountain people, and “hostiles” who like to nail human skulls to posts, marking land they consider theirs.

And the weirdness doesn’t end there.

Me: YEP. With less than a handful of exceptions (the sheriff, the doctor, etc.), everyone else’s stay in Rockton is limited to two years minimum and five years maximum before being cycled back out into the Real World.

If you’ve ever gone to Vegas with a group of friends and witnessed one (or all) of them going hog wild b/c VEGAS, imagine staying for YEARS. Only “Vegas” is in the woods, and there are no cell phones or internet access, so there is literally no way that anything you do during your tenure there will follow you back home.

ALSO, there’s a brothel (run by one of the permanent residents). And maybe cannibals in those surrounding woods.

Sound speculative enough for you?

So that’s the setting. What about the characters?

Sometimes a heroine does some stupid-ass thing, and you instantly hate her. You write her off as TSTL, and even if you don’t stop reading the book immediately, there’s a less than five percent chance of recovery. You keep reading, b/c, like Casey Duncan, you’re a masochist.

Step 1: Commit a youthful indiscretion that haunts you into adulthood despite being both (somewhat) accidental and (entirely) justifiable (as far as I’m concerned).

Step 2: Confess said indiscretion to a string of therapists b/c:

I don’t want absolution. I just want to tell my story. Because this is what I do. I play Russian roulette with Fate, knowing someday a therapist will break confidentiality and turn me in. It’s like when I was a child, weighed down by guilt over some wrongdoing but fearing the punishment too much to confess outright. I’d drop clues, reasoning that if I was meant to be caught, those hints would chamber the round. Magical, childish thinking . . .

Step 3: Continually escape discovery, reinforcing the “magical, childish thinking” that you began indulging when you were less than a year out of childhood, slowly growing immune to the recklessness of your actions, b/c no consequences.

Twelve years after you first started spinning that single bullet, instead of hearing the familiar click of an empty chamber, your hand jerks with the recoil of a live round, and the game is abruptly, irrevocably over.

That’s how Casey Duncan finds herself in Rockton . . . and waiting for her there is Eric Dalton.

I don’t know how many of you are longtime Armstrong readers, but Clayton Danvers has been my #1 book boyfriend since I knew there was such a thing. I might occasionally become temporarily infatuated with someone new like Kaz Brekker or Grim, but I always, always revert back to Clay.

Eric Dalton is a human version of Clay.

That’s not to say Armstrong took a readymade character, stripped him of his supernaturalness, and slapped a new name on him. She didn’t. She created an entirely new character, carefully constructing him to so that he resembles a human version of one of her most beloved characters, but who is wholly his own person.

I love the new version as much as I love our new heroine Casey.

As for the mysterious mystery itself, I had no idea whodunnit by the time we got to the Big Reveal, but when all was explained:

1. I didn’t immediately follow how Casey had come to her realization, but

2. I wasn’t terribly shocked either,

So that’s where the four star rating comes from, despite my love of the world and the characters.

But overall, CITY OF THE LOST by Kelley Armstrong was a fantastic start to a new series, and I can’t wait to get my eyeballs on whatever comes next for Rockton and all of its creeptastic residents. Highly recommended to anyone who likes a side of dark with their twisty.

6 responses to “Review: City of the Lost by Kelley Armstrong (@jessicadhaluska, @KelleyArmstrong, @MinotaurBooks)”