Happy book birthday to HOUND’S BITE, the fifth full-length novel in the bestselling, award-winning Ivy Granger urban fantasy series by E.J. Stevens! We are celebrating this book release with a review and a giveaway.

Grab your copy today and enter a world of bloodsucking vampires, psychotic faeries, and kick-ass heroines.


When E.J. isn’t at her writing desk she enjoys dancing along seaside cliffs, singing in graveyards, and sleeping in faerie circles. E.J. currently resides in a magical forest on the coast of Maine where she finds daily inspiration for her writing. 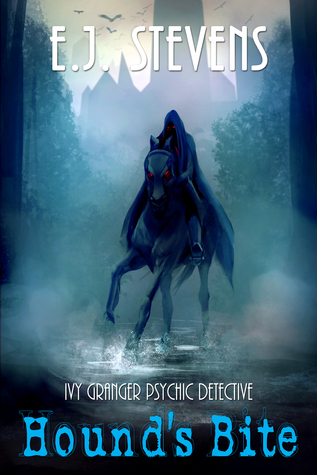 Ivy Granger thought she left the worst of Mab's creations behind when she escaped Faerie. She thought wrong.

In a cruel twist of fate, Ivy has unleashed a powerful horde of Unseelie beasts upon her city, turning her homecoming into a potential slaughter of innocents. Now Ivy must gather her allies to fight a reputedly unstoppable force--The Wild Hunt.

Will the training Ivy received in her father's court be enough to save her city, or will Harborsmouth be forced to kneel before the Lord of the Hunt? She is willing to risk her own life, but some sacrifices come at a cost worse than death. When an ally is bitten by one of The Wild Hunt's hounds, Ivy must face the possibility that winning this battle may mean killing the one person she has come to love most.

Oh Ivy, what a situation you’ve gotten yourself into this time! Ivy Granger, paranormal detective extraordinaire, has just come back from her latest adventure-literally minutes before-when she realizes that The Wild Hunt has followed her through the portal from Faerie. She’s back in Harborsmouth after what was a year for her, her fiance Ceff( the Kelpie King), and Torn (the lord of the Cat Sidhe), only to find that in the human world it’s only been a week. It’s right before dawn and they have only until dark of that same day, before the leader of the Wild Hunt, Herne, will blow his magical horn signaling the start of the battle. It’s a battle to take over Harborsmouth(just the first step to take over much more) and to rid the world of Ivy, while they are at it. It seems Ivy’s mother-that’s a whole other story-has backed the Wild Hunt with her magic and now she wants rid of Ivy. Ivy is new to her full powers and it’s growing steadily. She’s not about to let The Wild Hunt take over anything, much less kill her. After all, this is Ivy we are talking about!

Ivy wears me out-in a good way. She is a total bad ass and is seemingly never sits still. I adore her character and she is definitely one that grows with each book. Even though she has gone through everything that happened to her in Faerie and has just returned to Harborsmouth after a year, she doesn’t rest, eat, or even go to her home. She’s pulled immediately into the action, along with Cleff and Torn. And Cleff and Torn had an even worse time of it while in Faerie. A good friend of Ivy’s(and a witch), has now become pretty insane with power. When she kidnaps someone newly close to Ivy to use for a spell on this same day, Ivy drops everything to find her friend and thwart the witch. So not only do we have the Wild Hunt premise, we have the witches’s insane plot, as well. Also back for this installment are Jinx, Ivy’s best(and human)friend, and Forneus, the demon that Jinx loves, among many other familiar faces.

E.J. Stevens is brilliant at writing stories that include just about every kind of supernatural being and then some, all the while keeping it mainly about Ivy and her close circle of friends. She has written a character that is admirable in her tenaciousness towards keeping people safe, almost to the point of the loss of her own life, and still keeps Ivy down to earth and caring. Each book is another adventure in Ivy’s life in Harborsmouth, and each is part of an ongoing back story about Ivy finding out what she is supernaturally, growing into that role, and her quest to find her father. In doing so, she gets further and further involved with the supernatural creatures/characters of the city, and has long since become a hero to the supernaturals that reside in Harborsmouth.

I am always up for reading another Ivy adventure, as they are always well written, feature fun characters, and unusual premise’s. Sure, it’s urban fantasy, but it’s really different(and good)urban fantasy. Very refreshing in a reading world that has an over abundance of that type of read. To top it off, there is a couple of really sweet romances going on in this series, as well. While the romances are good, the main focus of the stories are the action, the supernatural characters, Harborsmouth, and Ivy herself. Keep in mind, they do follow a reading order, so I would suggest starting with book 1, Shadow Sight. I highly recommend this whole series to people 15 plus.

We are giving away a $15 Amazon Gift Card and a swag pack with Hound’s Bite swag signed by the author.

To enter, please use the Rafflecopter form below. This giveaway is open to US/UK/CA. Giveaway begins on release day July 12, 2016 and ends July 25, 2016 midnight EST.