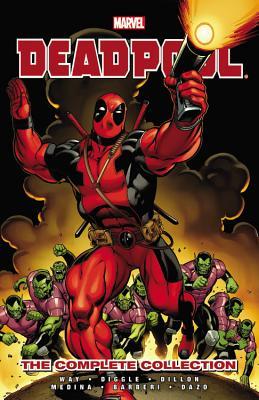 Daniel Way's hilarious, action-packed run begins here! When the Merc with a Mouth is hired to rub out Wolverine, sparks will fly! But when both men can regenerate any wound in minutes, how can either one expect to finish off his foe? And whoever wins will have to face Wolverine's murderous son, Daken! Then: The Skrulls have infiltrated Earth, but nobody warned them about Deadpool! The invaders replicate Deadpool's healing factor in a new generation of Super-Skrulls - but why is Deadpool himself leading this brigade against Earth? And when Norman Osborn double-crosses Deadpool, the maniacal merc unleashes a full-on assault against Avengers Tower! Norman must pull out all the stops - and that means deploying his new team of bloodthirsty, black-ops Thunderbolts! COLLECTING: WOLVERINE: ORIGINS 21-25, DEADPOOL (2008) 1-12, THUNDERBOLTS 130-131 and DEADPOOL SAGA

So here’s the thing. The movie and the graphic novel are similar and different. When I read Jessica Jones a few months back, I could see the story that was used to inspire the TV show. There was a storyline from the comics that it followed. That is really not the case here. There is no girlfriend (I’m sure you are all completely shocked that Hollywood added the love story to bring in more female viewers). Even the how he was made and the revenge against Ajax wasn’t in these books. The only thing that was in the movie that was included in this graphic novel was the scene with the pizza delivery guy. Now, that being said, there are two more volumes and I haven’t read those yet. So it is possible that more of the movie’s plot came from those books.

Now, Deadpool’s personality. That, I could completely feel in these books. It completely has conversations with himself. They are really good about letting you know what is going on by having a bubble for his out loud voice and a square for his internal voice. It was also very helpful that his bubbles were yellow, especially when he hires someone to dress like him to be a decoy. There are scenes where there are essentially two Deadpools on the page, but the real Deadpool talks in yellow.

There are four different stories in this book. First one, he is fighting Wolverine. Two people who are basically immortal fighting to the death. So yea. Then there is one where he is fighting these green men called Skrulls who infiltrated Earth. They had no idea that Deadpool would be so difficult to deal with. Then Norman Osborn, who is leading the Avengers, double crosses Deadpool, he attacks Avengers Tower. There are some people I remember like Black Widow and Ant Man. There are others that I don’t remember. In the last story, we are still fighting with Osborn and his cronies. Mostly Thunderbolt and Bullseye (who you might remember from the DareDevil movie).

The thing I really didn’t like about the book, it basically bleeped all the language. I mean, it is obvious this book is not meant for kids. He is the antihero we see in the movie, so why not just go ahead and put a parental advisory label on it and spell out the words. It was frustrating reading $*%$@ all the time.