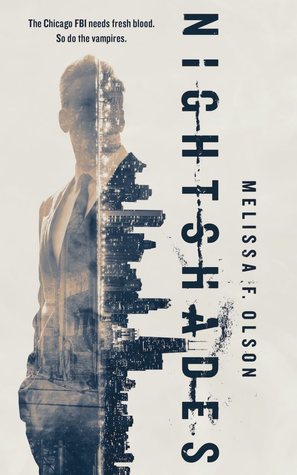 Alex McKenna is the new Special Agent in Charge of the Chicago office of the Bureau of Paranormal Investigations—the division tasked with investigating crimes involving shades.

Children have been going missing, and agents are routinely being slaughtered. It’s up to McKenna, and some unlikely allies, to get to the bottom of the problem, and find the kids before it’s too late.

Vampires are an exception more frequently than other Dead Things, but they’re rarely something I deliberately look for when picking out a book.

Occasionally an author manages to strike a balance that is pleasing to mine eyes.

Someone manages to capture to undeadliness, the bloodthirsty ruthlessness, while setting apart an individual or small group of individuals who have tenaciously clung to their former humanity, shunning the brutality of their more old school counterparts.

Meet Lindy, or Sieglind to not-her-friends, who despite vampires coming out of the proverbial closet, still lives and works among the humans.

Until the one vamp the government has managed to capture gives her up, anyway.

But rather than slaughtering the puny human who attempts to corner her, then hitting the road, she agrees to help him.

Lindy has a broader vision of the future than some of her vampire brethren. She dreams of a world where her kind can coexist with the humans. And in order for that dream to become reality, a powerful vampire hell-bent on teaching humans their place in the food chain must be stopped.

This is the story of how, with the help of humans, she begins to do just that. And lemme tell you, the obstacles encountered along the way kept me flying through the pages of my favorite Tor.com short story to date. FYI.

It’s not a new spin on vampires, but what Olson does with the well-known creature is highly entertaining. In a world where the existence of the supernatural is undeniably revealed, there are a million ways humanity can respond to that knowledge, and NIGHTSHADES is hopefully the first of many installments in Olson’s version of that brave new world. Highly recommended.