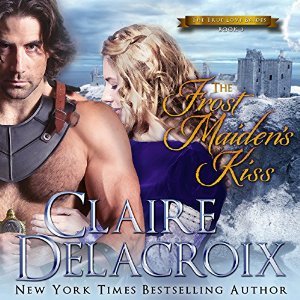 She enchanted him with a kiss - but winning her love would demand all he possessed.

After eight years abroad, Malcolm returns to Scotland with a fortune, a companion even more hardened than he and a determination to restore his inherited holding. But when that companion falls into peril, Malcolm seizes the chance to repay an old debt, trading his own soul for that of his doomed comrade. Knowing his days are limited and determined to leave a legacy of merit, Malcolm rebuilds Ravensmuir with all haste, though he fears he will never have an heir.

A night of violence has left Catriona with no home and no faith in the honor of men. She expects little good from a visit to her lady's brother, Laird of Ravensmuir, a known mercenary. But the handsome laird challenges her expectations with his courtesy, his allure - and his unexpected proposal. Knowing it is her sole chance to ensure her child's future, Catriona dares to accept Malcolm's hand. She soon realizes that this warrior fights a battle of his own and that she holds the key to his salvation. Little does she realize her past is in hot pursuit, seeking to destroy all she holds dear - including the laird who has thawed the frost of her reluctant heart.

The Frost Maiden’s Kiss is just one of the many books that I have bought after reading Kimberly’s reviews at Caffeinated Book Reviews. I took her advice, and listened instead of read and completely enjoyed it.

The year is 1427, and it’s winter in Scotland. Malcolm, laird of Ravensmuir, has just returned from eight years of hiring himself out as a mercenary. Ravensmuir had collapsed, killing the former laird, and there was no money to rebuild. He comes back a very rich man, but one that also had seen too much death-at his own hand. Another mercenary, Raphael, accompanies him to the ruins of Ravensmuir. While bunking in the stables, they hear the sounds(music) of the Fae coming from a hole in the ground. Events happen and now Malcolm’s life is in jeopardy when midsummer comes, due to a deal made with the Fae. I am leaving that as vague as I can. Suffice it to say that the Fae are very evil. When summer rolls around, Malcolm’s sister and her family, stop to spend the night in the newly rebuilt Ravensmuir. She brings with her, Catriona, a young, single, and very pregnant, serving woman. Malcolm is drawn to her immediately, and it’s only days away from when his life is to end, without an heir. See where this is going?

Malcolm’s character was a surprise to Catriona. She has had a horrible past, and only fell on hard times the night her baby was conceived. She lives her life fearing men, as men in those times are not exactly nice to women in her circumstances. Malcolm treats her with respect, so she is understandably shocked. She is also fascinated, and when they kiss that first night of their acquaintance, it changes everything for both of them. Catriona is feisty and outspoken as they come, and I appreciate that in a heroine. It’s pretty unusual for the time period for her to be that way, especially when speaking to the laird of the house- as a serving woman. Malcolm, even with his last eight years of killing and pillaging, turns out to be a good man. He knows that Catriona is hiding something, that she hasn’t always been a serving woman, and he also knows that he wants her.

The Fae aspect of this book wound through the story in different ways, all the while taking a backseat to the romance between Malcolm and Catriona. While it’s not the focus, it is however the catalyst for many of Malcolm’s decisions concerning Ravensmuir and Catriona. Storytelling back then was one of the few ways of entertainment the people had. A lot of it is in the form of poems and songs. Catriona sings of the Fae, but doesn’t believe in them. This was one aspect that I enjoyed listening to, rather than reading. Not that the narrator sings, but I found it easier to listen, when I would probably have skimmed that part of the book, had I been reading.

I did think the narrator, Saskia Maarleveld did a really good job. She was excellent at the accents she used, all the while keeping it clear for the reader to understand every word. Sometimes a Scots accent is hard to understand for the average person(Outlander anyone?), but not so here. I would like to listen to other audio books by this narrator as she added a lot to the story for me, especially as she portrayed the depths of feelings between the two main characters.

I don’t read that many historical books, although I do like them for a change of pace sometimes, and this one really fit the bill for me. I enjoyed getting to know the main characters, reading the obviously well researched historical aspects, and of course, the romance. As far as the Fae, we do see just enough of them to see how evil they are, and also see how much havoc they can create. There’s threats of war, and someone from Catriona’s past comes around just to cause more drama. There’s some twists here, and I think this is the perfect story for adult historical romance readers that enjoy a paranormal element in their stories.

FYI-It’s not necessary to read any of the other books in this series, in order to enjoy this one.