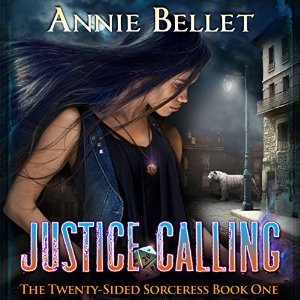 Jade Crow lives a quiet life running her comic book and game store in Wylde, Idaho. After twenty-five years fleeing from a powerful sorcerer who wants to eat her heart and take her powers, quiet suits her just fine. Surrounded by friends who are even less human than she is, Jade figures she's finally safe.

As long as she doesn't use her magic.

When dark powers threaten her friends' lives, a sexy shape-shifter enforcer shows up. He's the shifter world's judge, jury, and executioner rolled into one, and he thinks Jade is to blame. To clear her name, save her friends, and stop the villain, she'll have to use her wits... and her sorceress powers.

Except Jade knows that as soon as she does, a far deadlier nemesis awaits.


I am not sure where these books have been hiding, but I finally came across this series and decided to not only try it, but to listen instead of read. I enjoyed it enough that I bought the next one to listen to as well-five minutes after I finished this one. So yes, I thought it was good!

Jade Crow, a Native American sorcerer, owns and operates a comic book/gamer store in Wylde, Idaho. Wylde is the shape shifter capital of the west, due to ley lines that run through the town. Jade had moved there to keep one step ahead of her ex-boyfriend and fellow sorcerer. He wants to eat her heart in order to get all her power. Sorcerers are not exactly beloved by the supernatural community, so not only is she hiding what she is, she is also hiding who she is. When her best friend Harper’s mother’s fox form is found dead, she has to find out the why and the who that did it. Added into the mix is Alek, a Justice and tiger shifter, who after seeing a vision of Jade, traveled to Wylde to find her, and find out why his vision included dead shape shifters. Justice’s are peacekeepers for the Council of Nine, a governing body for the supernatural.

Jade is a fun heroine, at least I thought so. She is full of snark, frequently at her own expense, and has the potty mouth to back it up. She’s a nerd gamer who likes her quiet life, and her fellow nerd friends that she has found in Wylde. None of them know that she’s a sorcerer, instead they think she is a hedge witch. Alek is a “Hollywood version of a Norse god” per Jade’s description of him. Alek starts out treating Jade as a suspect, but it’s not long before they are working together. Harper, Jade’s best friend and fox shape shifter, is featured, but mostly is there to grieve for her mother. I would like to see her more fully realized in the next books. Actually, even though there are other friends brought into the story, I felt like only Jade is well realized by the author. Alek definitely needs more backstory, and actually more personality. Although there’s something to be said for tall, blonde and deadly!

Narration? Folly Blaine made the listen fun and upbeat for me. I really enjoyed her depiction of Jade. Her Russian accent for Alek was done well, so I also enjoyed the way he is shown. Others weren’t changed that much, as far as different voices, but that really didn’t bother me. She was a new to me narrator, but I thought she did a more than adequate job, and I wouldn’t hesitate to listen to others narrated by her.

As a first in an urban fantasy series, this book mostly held its own. It’s not major in scope, but then it was actually more of a novella than a book, as far as the length of the story. It does have a few moments of “iffy” life or death, and a villain that you don’t see coming. Surprisingly, for such a short listen, there is quite a bit of world building, and I always appreciate that. Could it have been more intricately plotted? Absolutely, but I think this was a good first in a series, one that sets the scene and introduces the characters. I look forward to listening to the next one, Murder of Crows. There’s already seven books published in the series, so no waiting!

FYI-This is a freebie and for $1.99, I added the audio book, and thought it worth the money even though it’s short.