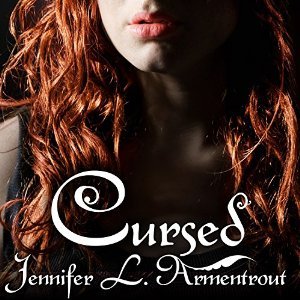 Ember operates on a no-touch policy with all living things - including boys. When Hayden Cromwell shows up, quoting Oscar Wilde and claiming that Ember's curse is a gift, she thinks he's a crazed cutie. But when he tells her he can help control it, she's more than interested. There's just one catch: Ember has to trust Hayden's adopted father, a man she's sure has sinister reasons for collecting children whose abilities weird even her out.

Jennifer Armentrout has a huge body of work, of which I have barely scratched the surface. But I definitely have been giving it my all lately! This outing by her wasn’t my favorite, I am sad to say. It wasn’t necessarily bad, it just wasn’t her best. This was a listen for me, something that I am enjoying more and more every day.

Ember died in the same car accident that also left her father dead and her mother a shadow of herself. Ember’s lttle sister, Olivia, brought Ember back from the dead. For two years, Ember has been mother to Olivia, while her mother barely moves from her bed. School life is sheer hell for Ember due to everyone thinking she is a freak. Her eyes changed color after being brought back, and all her scars from the accident stayed with her as well. While Olivia’s gift is saving people and animals from death, Ember’s gift is a whole lot darker. She kills with just a touch. When Ember kills someone(not on purpose), strangers come and kidnap Ember, Olivia, and her mother, and take them to an isolated mansion far away from their home. One of the strangers is a teenager named, Hayden. He has a very dark and powerful gift as well, and a dark history. The home has several gifted people living there, and no one except Hayden is welcoming to Ember.

Ember’s immediate attraction to Hayden is usurped by Hayden’s insta-love with Ember. He had followed her for most of the two years since the accident, and became a bit obsessed with her. I handle insta-love better with teenagers, because they are teenagers, so I didn’t have a real problem with that, but wondered at the two years of stalkerish behavior which Ember was never aware of. Of course once they are living in the same home, Ember has time to care about Hayden, as well. That being said, I liked Ember a lot better in the beginning of the book while she juggled school, lack of money, and being a mother to Olivia. She was a stronger person then, and not so much when she’s living with the group, at least I thought so. But, she is living under very stressful circumstances with the group, so I can even forgive that a bit. Hayden with all his powerful gifts, is a bit lackluster at times as a hero. I get that he loves her, has a horrible past, and is trying to take care of her, but he just wasn’t the best romantic hero for me. I imagine it was hard to write a romance about a couple that can only touch for a few seconds here and there, at least at the beginning. He takes it upon himself to teach her to control her power, lest she be given over to a shadowy group that doesn’t treat gifted ones well, and that’s putting it mildly.

There is some drama, some life or death moments, romance, and a bit of a mystery going on as well. Although I call it a mystery, it wasn’t a mystery to me at all. In fact there was only a few things that surprised me during this read. I know this is young adult, but still…

Narration? Saskia Maarleveld did well with the female voices, Ember’s and Olivia’s, in particular. Her male voices left a lot to be desired for me. In fact, Hayden’s voice made him sound too intense, dark, and not young. It kind of ruined the listen for me and took me out of the story many times. I will be a bit hesitant to listen to others by this narrator for that reason alone. Half of a star was taken off for narration.

This is recommended to young adult readers of paranormal romance. Adults may find the mystery lacking, so just a heads up. Ms. Armentrout is still a favorite author of mine, and it was bound to happen that one of her books wouldn’t do it for me. However, it could have just been me, so don’t let that keep you from trying this one out.