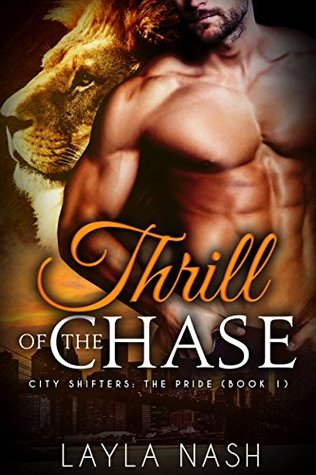 Up-and-coming chef Natalia Spencer has enough on her plate dealing with a struggling restaurant and a corrupt manager selling her out of pantry and kitchen. She doesn't have time for arrogant customers, even a gorgeous corporate raider in a bespoke suit with muscles that just don't stop. Until, of course, he buys her restaurant and saves her life.

Logan Chase, alpha of his lion shifter pride, is intrigued when the feisty chef kicks him out of her restaurant. He's enraged when someone attacks her. And he's intoxicated when he finally gets close enough to kiss her. But when he shifts in front of her and his lion comes out to play, he risks losing Natalia forever.

Natalia just wants to cook and snuggle with a nice guy. Shacking up with a man who's also a lion means inviting a new level of crazy into her life, along with his unruly brothers, and even her werewolf best friends warn her away. Can she and Logan create a steamy relationship from scratch, or are they a recipe for disaster?

Sometimes I just want a quick read and Thrill of the Chase fits this bill quite nicely. Lion shifters? Gimme! I liked it so much I have already bought two more in the series. Each book tells a different Chase brother’s story.

In this author’s world building, Lion shifters are dying out. There’s only one lioness left that is of child bearing age, and she’s not a part of their pride. To that end, the brothers meet for dinner at a newer restaurant in a trendy neighborhood to plan for their prides future. When Lion shifter and corporate raider, Logan Chase, sends his steak back twice and asks to speak to the chef, little does he know that his destiny is going to come face to face with him, and then kick him out of the restaurant! Natalia is about the only thing keeping the small restaurant from failing. A Le Cordon Bleu graduate, she knows how to cook a steak and she is just mad enough at the restaurant manager for his misdeeds, that she doesn’t have time for a customer who tries to tell her how to cook his already perfectly cooked steak.

Natalia was a feisty heroine, to say the least. She’s human and knows nothing about the paranormal world. When Logan tricks her into another meeting, she knows she is attracted to him. On Logan’s part, he knows she is his mate, plain and simple. Logan is leader of his pride and the eldest of five brothers-all of them living in a huge mansion. He’s used to getting what he wants and now he wants Natalia.

The author employs the use of a shifter instantly(more or less)recognizing his mate in this story. I have no problems with that because that is part of the nature of shifters. That being said, I think Natalia falls for Logan a bit too fast, and it wasn’t as believable for me. Oh it’s not one of those jump into bed immediately ones, but it wasn’t a slow burn romance either. I did think the way Natalia reacts to Logan as a Lion was one of the most realistic reactions to a shifter that I have read. I can not stand it when a human barely reacts to seeing a shifter shift. So I liked how the author handled this part. Keep in mind, these are not really spoilers-not when you go into reading this knowing it’s a paranormal romance.

Sure shifter romances are a dime a dozen these days. But some do stand out for me and I do have a few favorites. This one was well written, the characters seemed very realistic-regardless of the paranormal element, and I really mostly enjoyed the romance. In addition, some of the brothers really stood out for me and made me want to read their stories. That could have been all, but the author also threw in some suspense and dangerous moments for Natalia and I thought that worked too.

All in all. this whole book worked for me and I read it in one sitting. It had humor, a helping of angst, a few steamy moments, and I highly recommend this to adult paranormal romance fans. Me? I am left wondering how I had no idea this series even existed until now!

18 responses to “Review: Thrill of the Chase by Layla Nash (@Mollykatie112, @laylanashwrites)”