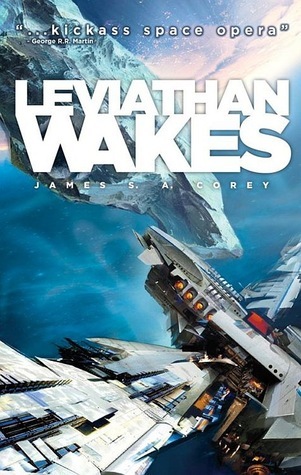 Humanity has colonized the solar system - Mars, the Moon, the Asteroid Belt and beyond - but the stars are still out of our reach.

Jim Holden is XO of an ice miner making runs from the rings of Saturn to the mining stations of the Belt. When he and his crew stumble upon a derelict ship, the Scopuli, they find themselves in possession of a secret they never wanted. A secret that someone is willing to kill for - and kill on a scale unfathomable to Jim and his crew. War is brewing in the system unless he can find out who left the ship and why.

Detective Miller is looking for a girl. One girl in a system of billions, but her parents have money and money talks. When the trail leads him to the Scopuli and rebel sympathizer Holden, he realizes that this girl may be the key to everything.

Holden and Miller must thread the needle between the Earth government, the Outer Planet revolutionaries, and secretive corporations - and the odds are against them. But out in the Belt, the rules are different, and one small ship can change the fate of the universe.


Here’s another Jessica quirk: I LOVE sci-fi on screen, but I rarely like reading it. I have no idea why. Some things just are.

BUT. I binge-watched The Expanse last week, and it was good enough that it made me curious. There were no giant-insects-as-aliens, no surplus of tech gobbledygook, and no discernible artificial intelligence (the things that make me avoid sci-fi literature, even though I can usually handle the movie version), and what there was was mysteriously mysterious, plus, you know, SPACE, so pretty great, IMO.

The story revolves around two male MCs, Jim Holden, the XO of the ice-hauling freighter Canterbury, and Joe Miller, a washed-up, “prototypical Noir dectective” (description stolen from Mike, b/c it’s darn near perfect, and I didn’t want to bother coming up with my own lesser version).

Holden is a thirty-ish bright-eyed idealist whose naivete borders on unbelievable, given his dishonorable discharge from the UN Navy (for punching a superior officer who needed to be punched, if I remember correctly) amongst other things. He’s also rather immature about relationships, convincing himself that he’s in love with every female he lusts after. His actions would’ve been more consistent with someone ten years younger, but then he wouldn’t have the experience to land his XO gig, so what are you going to do?

Miller . . . is a hot tepid mess. He’s in his mid-fifties, divorced in what feels like the recent past, but in reality is probably going on a decade ago, and unable to move on. He’s a drunk. He moves through life in a contradictory haze of apathy and regret. Then, when he’s forced to face a personal truth that he’s thus far insulated himself from, he latches on to his last assignment: a retrieval job for the rich parents of a young woman who has turned her back on her upbringing to champion the Belters, the dregs and underdogs of her world.

During his detecting, Miller becomes infatuated with the Earthen-turned-Belter freedom fighter. He’s obsessed with finding her, convincing himself that if he can save Juliette Andromeda Mao, all of life’s disappointments and failures will be worth it.

It’s another stretch, or at least it was for me, but I’m inexperienced in all things Noir, so maybe that’s my ignorance talking.

Regardless, both Holden’s idealism and Miller’s transference were stretches that I was willing and able to accommodate, in part b/c of the character growth both MCs went through from start to finish.

At first, I straight-up didn’t like Holden. I thought he was an idiot, who recklessly made decisions that had consequences he couldn’t begin to understand, and a manwhore who justified his manwhoring by believing his was in lurrrrve. Every, single time. *rolls eyes*

But just as I was about to write him off, someone schooled him about a little thing called REALITY, and that in conjunction with several other hard-earned lessons he eventually took to heart, he turned into someone I could admire. He was no longer an unrealistic dreamer, he was an uncorruptible man who stood by the principles that guided every aspect of his life.

The only other thing I’ll say about him is that View Spoiler »the Romantic in me wishes and hopes that he’s with Julie now. That when he inevitably succumbed to the protomolecule, he bonded with her, and she knew him and accepted him the way he knew her. *WAILS* « Hide Spoiler

Something readers coming to LEVIATHAN WAKES post-Syfy series should know is that Chrisjen Avasarala doesn’t show up until book 2, CALIBAN’S WAR. The absence of any female POVs makes this a very male-driven story, but I’ve been assured that problem (if you see that as a problem) is resolved in the later installments. CALIBAN’S WAR introduces not only Chrisjen Avasarala, but also a “space Brienne with power armor.” (<------description also courtesy of Mike.)

*visions of Aeryn Sun dance in my head*

The first half of the book is mostly repeat, if you’ve watched the series, but I knew that going into it, and when I hit new material at the midway point, it took off. So that’s also important to know: season one of the Syfy series doesn’t cover the entire first book, only half of it.

So maybe it’s consistently like this throughout the book for people who read LEVIATHAN WAKES prior to watching THE EXPANSE, but at around 60%, revelation upon revelation starting being revealed, and in a holy-crap-that’s-so-cool or holy-crap-WTF?! kind of way, not an overwhelming bombardment of information kind of way.

I plowed through it, resenting every moment I had to spend away from it, and when I finally got to the ending, it was perfect. There were enough unanswered questions to keep me eager to read the next installment, while still having sufficient closure to be satisfying. And the closure allowed me to appreciate Corey’s wry humor in a way I probably missed in earlier parts of the book, b/c too desperate to find out WHAT IS HAPPENING to pay attention to silly things like the subtleties of wry humor. Fred Johnson’s reference to himself as a “marriage counselor” even made laugh out loud.

Verdict: LEVIATHAN WAKES by James S. A. Corey is sci-fi enough to satisfy the hardcore fans of the genre without being overwhelming to the rest of us who just kinda like space and the idea of intelligent life in the universe. This mystery is just beginning to unravel and I will definitely be reading CALIBAN’S WAR to find out what happens next. Highly recommended.