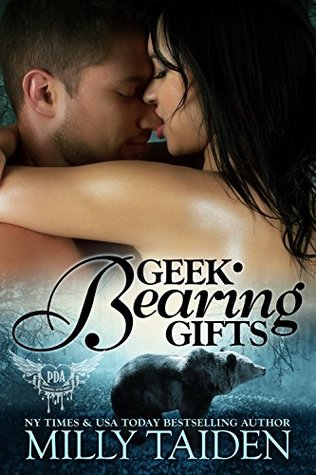 Nita Islas wants to find love. She's tired of the superficial relationships and is ready to give true romance a try. She uses the Paranormal Dating Agency and hopes they can help her where all others have failed. What she didn't expect was to find her date flat on his back in nothing more than a towel.

Ky Stone has been in love with curvy and funny Nita since they were in High School. When she moved away, she took his heart with her. Then one day Ky wakes up to find her leaning over him. He's sure he's died and gone to heaven. He has no idea what she's doing there, but he's sure as hell not letting her leave.

Fate, meddling family and the PDA have brought them together again. The chemistry between them is explosive. But there's problems with Ky's neighboring clan and he's keeping secrets from Nita. He needs to find a way to open up to her or lies and unexpected danger could tear them apart... forever.

This is another cute book in this series. It was a quick read. I think I read it in two hours, maybe less. Once again we have Gerri Wilder, the owner of the Paranormal Dating Agency, playing matchmaker. She does ask a lot when she sets you up. She wants you to completely trust her and keep an open mind. Not a bad idea when going into a new relationship.

Ky Stone has changed a lot since he was a stuttering, scrawny teenage boy that fell in love with Nita while they were in school. That is until she moved away. Then when his sister sets him up for a blind date. He was in his kitchen when someone comes in and knocks him out cold. When he wakes up, he is staring into the face of the girl of his dreams, the girl he’s loved since he was fourteen. Was he dreaming? But, she doesn’t recognize him. What to do?

This is another cute addition to the story. Ky isn’t real smart the relationship department, though he is a genius at many other things, he decides to keep his secret, which you know will bite him on the ass. This is the big source of conflict between the two. There is also some issues with neighboring bear clans fighting over territory and fishing rights.

*I would like to thank Angel’s Guilty Pleasures for loaning me this ebook.