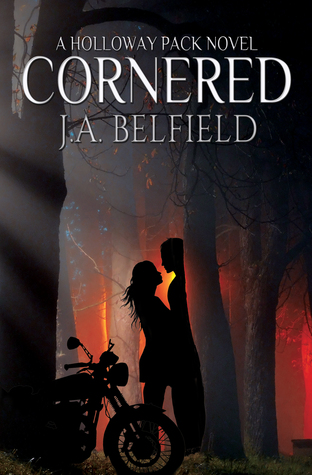 Daniel Larsen is playing a dangerous game, and he doesn't even know it.


I was really eager to jump back into the HOLLOWAY PACK universe after a two-year hiatus, and having previously enjoyed Kyle Larsen’s story in book 4, UNNATURAL, the odds of me gelling with the younger Larsen brother as well seemed good. Regrettably, Danny came off as a petulant child incapable of understanding that there’s no “I” in team, and consequently CORNERED offered next to no character growth, and a second rate HEA.

The plot aligned somewhat with the preceding installment, so I was happy that Ethan, Brooke, Kyle and Gabe finally got some closure even though the means was kinda inadequate given the level of torture that they, and now Danny have endured. This was probably the darkest tome of the series, and other than boasting one impressively long lovemaking session, I found that the pacing was more sluggish than I would have liked.

Larsen was a walking disaster in this novel; from the immature way he dealt with his brother’s matehood, to his substance abuse, to his selfish refusal to follow his alpha’s orders which subsequently endangered the entire pack, to his irresponsible sexual relations. I wish I could say that he realized the error of his ways in the end, but it was more of a case of him left with no choice after painting himself into a corner.

There’s one graphic scene that some readers might find offensive however personally, after everything that Danny did in this volume, I was appeased that he suffered severe consequences for his actions. There were also a number of inconsistencies in this title; the protagonist pleaded ignorance a lot, but he’s a werewolf, how did he not smell the drugs in the cakes? Or that the blonde was a supe? Or that Liv was View Spoiler »ovulating « Hide Spoiler?

CORNERED wasn’t the best that the HOLLOWAY PACK has to offer.