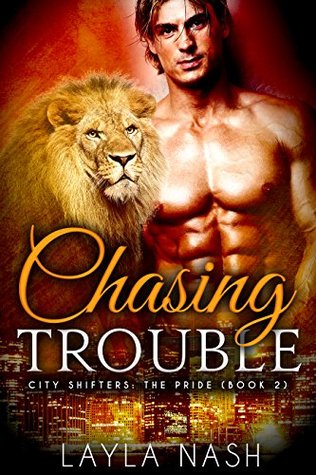 Eloise Deacon has a deadline: deliver a hyena princess and ten grand in ransom money in less than two days, or Eloise will pay with her life. The only problem is, she can't find the princess and barely has two nickels to rub together. She'll need more than her mother's Medusa powers to stay alive -- until handsome Benedict Chase walks into her life.

Benedict Chase spends most of his time chasing trouble for his brothers. The girl with the silver eyes is clearly her own kind of trouble, but he's powerless to resist when his lion claims her. So what if her hair literally has a mind of its own and most of the shifters in the city are after her? She's exactly who he's been looking for, as long as she doesn't paralyze him by mistake.

But saving Eloise from the trouble she's in means risking a war with the hyenas, and it could drag every other shifter in the city into an interspecies civil war. Benedict knows she's worth it, but his brothers aren't so sure. Will he go against the Pride to save her, risking everything the Chase brothers have built?

After reading book one, Thrill of the Chase, I knew I wanted to continue on with this series. If I thought the first one was good, I really thought this one was even better. Lion shifters? Bring them on!

The first book introduced the reader to a family of lion shifters, the Chase brothers. They are rich, powerful, and none of them were mated until Logan, the leader of their pride, found his mate, Natalia. This time around, Benedict, the lawyer, finds his mate-in the most unlikely place. While bailing out his brother, Atticus, he meets Eloise, when she is brought in to the police station. He is immediately drawn to her, and decides to defend her, regardless of the charges. Eloise, a former foster and street kid, makes her way doing things that are dubious in nature. She has a rap sheet, but nothing particularly dangerous. It’s just the way she has learned to survive. And the thing is, Eloise isn’t exactly human. And what she is supernaturally, is a creature that although I have heard of it(Greek mythology), I have never seen it used as a character. I am not letting on what she is, as you have to read awhile to figure it out. I found it to be very unique, although when I googled it, it seems Marvel comics uses it as a character, as well.

Eloise has got herself into quite the pickle this time. She was hired to deliver money to ransom the queen of the hyenas’s daughter, and when she went back, the money was gone and her friend Lacey(the daughter) was not returned. Now the queen has given her only a short period of time to come up with her missing $10,000 and Lacey unharmed-or else. Now that Benedict is in the picture, Eloise is hoping the pride or her wolf friends will help her. She’s pretty desperate and makes the mistake of thinking Benedict only wants her for sex in exchange for the help/money. She ended up being an extremely complex character, inherently good, but left in horrible circumstances and living the only way she can, especially with her”affliction.” As far as Benedict is concerned, he is just immediately smitten with her, and the mate thing just kind of happens-no aha moment to speak of, it just is.

What follows was not only a good, yet complex, romance, but also ended up being suspenseful and full of mystery as Eloise and Benedict race against the clock to figure out who took the money and where Lacey is being held. Time could be up for both Lacey and Eloise because you don’t want to cross the queen of the hyena’s. Couple all of this with what creature Eloise is and all the baggage that comes with it, and this book ended up being a page turner at times for me. I really like these lion shifter brothers and I recommend it to adult(due to sensual scenes)readers of paranormal romance.