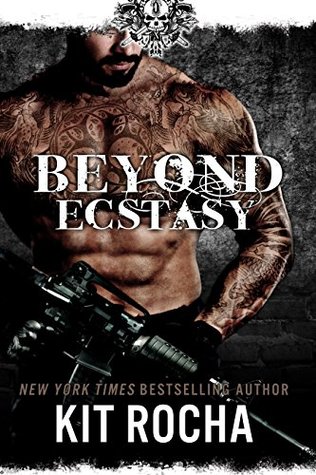 The next-to-last book in the bestselling BEYOND series...

The O’Kanes have a reputation for working hard and playing harder—except for Hawk. He joined the gang with one goal: to ensure his family’s survival through the impending war with Eden. It’s been years since he had the luxury of wanting anything for himself. Now, he wants Jeni. From the first moment he saw her, he’s been obsessed with making her his. Not for a night—forever.

Jeni’s been lusting after the former smuggler for months, but he keeps shutting her down. She’s almost given up on getting him in her bed when he offers her the last thing she ever expected—a collar. Accepting it means belonging to him, body and soul. It’s a reckless gamble, but Jeni can’t resist the chance to slip under Hawk’s armor.

The only thing more shocking than the dark, dangerous pleasure they discover is how right it feels. But falling in love is even more reckless when forever is far from guaranteed. Because they aren’t just at war, they’re out of time—and every breath could be their last. I can’t believe this is the second to last book in this series. I can’t imagine not having the O’Kanes. So much as happened through the past seven books leading up to this one. War has finally come.

If you’re not very familiar with this series, there’s Eden, which is where the elites live. They feel that they are special. They are also very puritan in their thinking. Then there’s the different sectors. Each sector has something that they specialize in. This series mostly follows Sector Four which makes whiskey. There’s also Sector Five which makes drugs (both medicinal and recreational). Section Six has farms, Sector Two has brothels and so on.

This series takes place in Sector Four following Dallas O’Kane and his group of O’Kanes. They are a group of extremely loyal family, where family is more than blood. Dallas doesn’t want to lead. He just wants to drink, have sex and party, but he protects what’s his. To do that, he must lead.

Throughout this series, we’ve seen the addition of several new O’Kanes, many who’ve imported in from different sectors. Hawk is no different. He came from Six. He was raised on the farms with a mother who wasn’t much older than he was. He also saw himself as a protector for his many stepmothers and sisters. On the farms, men would take several wive and have as many children as possible to help on the farm.

Jeni had worked with Gia at the brothel for a while. She’s originally from Eden. Then she ends up working for Dallas as a dancer. I love how she becomes so much more than just a dancer. She works with Noelle to help with the war.

This romance was a very sweet one. Probably the sweetest one of the series. Hawk is a sweetheart and very protective. That isn’t to say that the other O’Kanes aren’t protective, they are. He is just protective in a different way. He is less alpha dog and more sweet about it. You can see it in the way he cares for Jeni’s needs and the way he cares for his mother and sisters. I also love how Jeni turns him down for all the right reasons. She wants to get to know him better before she takes his collar. She wants things her way. I love her strength to say no, even though you want him because it wasn’t right at the time. Especially with the war brewing.

While I enjoyed the romance of this story, it was the overall story arc that has been building for throughout the series that really has been chomping at the bit for this series. War with Eden is no longer on the horizon, it is here. This is something that everyone knew was coming. For some, they are glad the wait is over. For others, there are some really tough losses. This book had my eyes tearing up more than once, even for one character I never would’ve guessed that I would be upset to see dead.

This is a wonderful series that has amazing characters.The characters are really what makes this series one of my favorite series right now. Don’t get me wrong, I love the world that Kit Rocha built, but it is the characters that keep bringing me back. All of the O’Kanes and their strength and loyalty.

If you haven’t tried this series, I highly recommend it. You can pick up the first three books in the series, Beyond Series Bundle (Books 1-3) at the time of this posting free in ebook format. The audiobooks are wonderfully done too. I’ve listened to a few of them and I really like the narrator.

The O’Kane’s didn’t just believe in the pleasure that came with power. They believed in the responsibility, too. For that, Hawk would follow them to hell. Maybe literally.

This was the part no one outside these walls could ever understand. O’Kane’s didn’t bend, didn’t break. They were stronger than steel because they held one another up. If one of them needed help, their brothers and sisters would step in and shoulder some of the load.

29 responses to “Review: Beyond Ecstasy by Kit Rocha (@mlsimmons, @kitrocha)”