Jade had driven by Rafe Denali’s house numerous times, watching for Rafe to leave so she could run into him wherever he ended up going. Accidentally. The palatial mansion was set back off the road, a long circular drive visible beyond the gates and providing a glimpse of the white stucco house with its ocean view, but not much more.
This was the first time she’d seen him leaving the estate. He was alone, driving a bright blue Maserati with the top down, and she followed him to a farmers market and parked several cars away.
Wearing a pair of blue shorts, sandals, a pale blue T-shirt, and mirrored sunglasses, he climbed out of his car. He didn’t look like he was a billionaire, except he had a hot car, but otherwise, he just blended in with the rest of the shoppers.
She hurried to catch up to him. She couldn’t imagine what he’d be buying. Wouldn’t he have someone else buy his groceries? If she were shopping, she’d get fresh corn and tomatoes.
He stopped at a colorful booth filled with flowers, a bright-red canopy shielding the bouquets and shoppers from the afternoon sun.
In all of the research she had done on Rafe, she hadn’t seen one thing that indicated he had a girlfriend. She let out her breath. Just her luck.
She hesitated, feeling jittery and uptight, but she had to run into him, making it look real and not faked, and then apologize. He’d smell she was a wolf and maybe get interested. God, how she hated this. But she had to do it for her son.
She drew closer, the crowd of shoppers helping to conceal her as she focused on the flowers as if they were her goal and not the hot wolf.
Just as she was getting closer to him, a fair-haired man wearing jeans, sandals, and a black muscle shirt approached Rafe. “Hey, getting something for Consuela?”
“Yeah, Derek. Not sure what else to get her. But I thought she’d like these.” He paid for the bouquet of red and pink roses, and the two men walked off.
Damn. If the breeze had been blowing in her favor, he would have smelled her, turned, and checked her out, at the very least.
She wasn’t going to get anywhere with this while he was with a friend—or whoever Derek was. But since it was the first time she’d seen Rafe leave his place, she decided to wait in her car for him to leave and see where he went next. Or maybe try running into him when Derek left.
She climbed into her car and rolled down the windows, then Googled Rafe on her cell phone. The site that mentioned him the most was written by a photojournalist named LK Marks. He seemed to be obsessed with Rafe’s lifestyle—how Rafe hosted charity events but seemed reclusive otherwise. A number of times, LK Marks mentioned that Rafe was one of California’s most eligible bachelors.
The last posting anyone had made concerning the billionaire was a week ago. So maybe the paparazzi were off chasing someone else for a change and Rafe was old news. Which was good news for her.
An hour passed. The breeze helped keep her cool, but she was annoyed that Rafe was taking so long to return to his car.
Then two hours passed. She left her vehicle and was searching for him when she spied him sitting on the veranda of a Mexican café, burritos on his plate and a glass of iced tea beside it. He was talking with Derek, a couple of packages on the table next to the bouquet of roses. So they must have gone shopping. She let her breath out in an irritated huff. She wasn’t cut out for spy work.
Now what? She needed to get Rafe alone. Unless she could take a seat near him and he caught her wolf scent and piqued his interest, but all the tables out on the veranda were full. She asked the hostess how long it would take to get a veranda seat. Approximately an hour. Across the street, there was a sandwich shop. She headed to it, figuring she could get a view of the Mexican café from there and watch until he left.
Twenty-minute wait there. Trying not to look obvious that she was watching Rafe, she quickly glanced over the menu and decided on a chicken and provolone sandwich. She was called to her table, and when she walked with the hostess through the restaurant to the outdoor seating, she saw where the woman was leading her. Perfect. Flowers obscured the men’s view of her, but she could peek through to watch them. She took her seat and thanked the hostess, then looked over at the men—but they were gone.


USA Today bestselling author Terry Spear has written over fifty paranormal and medieval Highland historical romances. In 2008 Heart of the Wolf was named a Publishers Weekly Best Book of the Year. A retired officer of the U.S. Army Reserves, Terry also creates award-winning teddy bears that have found homes all over the world and is raising two Havanese puppies. She lives in Crawford, Texas. 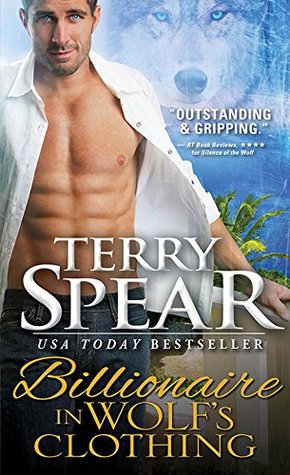 Real estate mogul werewolf Rafe Denali didn’t get where he is in life by being a pushover. When sexy she-wolf Jade Ashton nearly drowns in the surf outside his beach house, he knows better than to bring her into his home and his heart. But there’s something about her that brings out his strongest instincts…


Rafe has good reason to be suspicious. Jade Ashton and her baby son are pawns in an evil wolf’s fatal plan. How can Jade betray the gorgeous man who rescued her? But if she doesn’t, her baby will die, and her own life hangs in the balance…

To get to the truth, Rafe is going to have to gain Jade’s trust. If he can do that, he just might be her last—and best—hope…