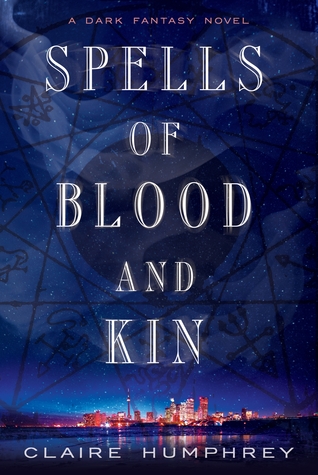 In her extraordinary debut, Spells of Blood and Kin, Claire Humphrey deftly weaves her paranormal world with vivid emotional depth and gritty violence. Bringing together themes of death, addiction, and grief, Claire takes readers on a human journey that goes beyond fantasy.

When her beloved grandmother dies suddenly, 22-year-old Lissa Nevsky is left with no choice but to take over her grandmother's magical position in their small folk community. That includes honoring a debt owed to the dangerous stranger who appears at Lissa's door.

Maksim Volkov needs magic to keep his brutal nature leashed, but he's already lost control once: his blood-borne lust for violence infects Nick Kaisaris, a charming slacker out celebrating the end of finals. Now Nick is somewhere else in Toronto, going slowly mad, and Maksim must find him before he hurts more people.

Lissa must uncover forbidden secrets and mend family rifts in order to prevent Maksim from hurting more people, including himself. If she fails, Maksim will have no choice but to destroy both himself and Nick.


To begin, for all of you non-English majors:

Postmodern literature: is a form of literature which is marked, both stylistically and ideologically, by a reliance on such literary conventions as fragmentation, paradox, unreliable narrators, often unrealistic and downright impossible plots, games, parody, paranoia, dark humor and authorial self-reference. Postmodern authors tend to reject outright meanings in their novels, stories and poems, and, instead, highlight and celebrate the possibility of multiple meanings, or a complete lack of meaning, within a single literary work.

Now that you have the convoluted definition, here’s mine: depressing crap and trash that is often utterly pointless.

Or I should say, what mine used to be. Before SPELLS OF BLOOD AND KIN by Claire Humphrey.

But that’s not entirely true either, b/c I don’t think I can label it as 100% postmodern. I’d say it’s somewhere between 66 – 75% postmodern, so it would seem that the 25 – 34% of non-depressing crap and trash that isn’t utterly pointless is all I needed to make the literary trend redeemable to mine eyes.

It’s the dash of hope that keeps life from being meaningless that makes the difference.

SO. From what I can tell, SPELLS OF BLOOD AND KIN isn’t doing too well in the advance review ratings department. Based on my experience with the book, I’m going to guess it’s for one of the following reasons:

Lots of people don’t like more than one POV, if they aren’t reading 600+ page high fantasies. I can’t comment on the why of that, b/c I’m not one of those people.

I do generally prefer first person narratives, but, if done well, it doesn’t take long for me to adapt, and this book is a good example of exactly that.

3. That element of postmodernism I was fussing about earlier.

There are two separate plot threads that make everything building up to their conclusions feel—at a glance—like wasted time, one of them concluding rather abruptly in the last 3%, the other leaving you wondering about what will happen in forty or sixty years when the character finds himself in the same situation as he began this story in.

That’s off-putting. No way around it.

I was fully engaged in the story within the first couple turns of POV changes. That’s hard to do under normal circumstances, but Humphrey managed it after dropping me head first into the story, no background, no nothing, so . . . *tips hat*

Baba had been dead for four days by the time Lissa got to speak with her.

And it doesn’t stop there. The first time we meet our three MCs, one wakes groggily in alley after being mugged, one inexplicably goes skinny dipping in Lake Ontario, and the aforementioned Lissa is dealing with the death of her grandmother.

But the way Humphrey slowly doled out information kept me on the hook. She gave just enough to keep me from being frustrated, and consistently threw out things so bizarre or so reprehensible that I had to keep reading to find out why? What was the twist? Surely Maksim didn’t just show up at some chick’s house, break down the door, and punch her in the face? It can’t be that simple? He isn’t just some abusive RAGE beast . . . is he . . .?

No. He’s not. And Lissa isn’t just a hateful bitch.

But if you want to know ALL THE THINGS, you have to stick with it, which isn’t a hard task, IMO.

SPELLS OF BLOOD AND KIN by Claire Humphrey isn’t your typical urban fantasy. There’s no Bad Guy trying to do a Bad Thing who must be stopped by a sassy heroine and her merry band of accomplices. There’s no supernatural governing council either keeping the peace with the humans since their existence was revealed or keeping the silence to ensure they aren’t discovered. There’s a young woman who can work small magics during the full moon, there’s a man who’s lived several lifetimes, his battle to control his bloodlust getting increasingly more difficult as time passes, and there’s a young man whose life was spinning out of control long before he met the other two. But, for a short time, their lives become entangled, and this is that story. I happen to think it’s a good one. Highly recommended.