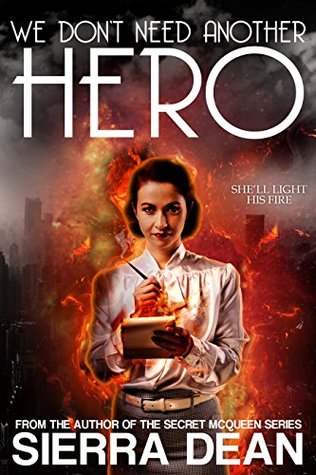 The city of Gold Bay once had a great champion in local superhero Apollo. But after his brutal defeat at the hands of The Scourge, the citizens have been left to the villainous whims of a madman.

When young reporter Rebecca “Bex” Beckett returns home to care for her sick father, the last thing she expects is his request that she play caretaker to his shut-in employer, Camden Nash. Cam is not the same man Bex remembers from ten years earlier. Once a pinnacle of society, he is now a broken shell of his former self. Yet something is simmering between them.

As Bex becomes interested in the elusive mayor of Gold Bay, Simon Nerezza, Cam must rally to become the hero he once was in order to protect Bex from Nerezza’s dark past. But Bex is no damsel in distress. She has a trick or two up her own sleeve, and things in the city on the bay around about to get super hot.

Contains a grumpy has-been hero, a fiery heroine who is too hot to handle, and a villain who’d love nothing more than to have them both in the palm of his hand.


There are two things in life that I am incapable of saying no to: chocolate and books by Sierra Dean. WE DON’T NEED ANOTHER HERO was uncharted territory for me because up until now I’ve stuck mostly to this author’s SECRET MCQUEEN series and its spin-off titles. I had next to no knowledge of this story’s plot or characters, and although I did have certain expectations given that it’s an Urban Fantasy about superheroes, I was very happy with what I discovered between the pages.

This novel deviated from the infallible protagonist norm by highlighting what happens to the man and his city when a seemingly invincible big cheese actually falls. It was an interesting take on a genre that’s usually all about the victories. I particularly liked that Dean fast forwarded to fifteen years after Apollo’s defeat, honed in on the emotional fallout, humanized an otherwise untouchable personage with a disability, and then revived hope with an apprentice type situation.

Bex was a blast from Cam’s past, and I enjoyed watching their romance play out. It had a second chance at love feel to it, albeit she would have been too young for him had the events in this book occurred when their relationship was still in its pseudo sibling stage. This tale took place in an era where women were still fighting for equal rights which made every hurdle that Beckett jumped extra important, and as a team they did end up defeating The Scourge before the final curtain fell.

Don’t let the length fool you, there’s more to WE DON’T NEED ANOTHER HERO than meets the eye.

4 responses to “Review: We Don’t Need Another Hero by Sierra Dean (@sierradean)”