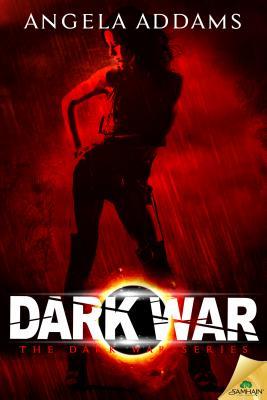 "As the darkness rises, magic is their only defense if it doesn t end the world."

Witch. Hunter. Traitor. Kali Richards s solitary life s work is to hunt the evildoers of her own kind and bring them to justice. She s poised to catch her latest bounty when she realizes her quarry is a witch-vampire hybrid with a taste for blood Kali s blood.

She s lost quite a lot of it when Wyatt, the ex who still owns the pieces of her shattered heart, comes to her rescue. Eight years apart hasn t cooled her anger over their breakup. Neither has it cooled the desire still steaming between them.

As Wyatt heals her wounds, he brings disturbing news: Kali s mother has awakened from a years-long coma with a prophecy on her lips. A Dark War is coming that will pit supernatural against human. Kali is the key to stopping it.

Except Kali isn t what you d call adept at spellcasting. Like it or not, she needs a lot of help. From Wyatt, and from the organization that she turned her back on once before the Witch Hunter s Union. Even with an army at her back, she s in for one hell of a ride

"Warning: May contain a stubborn little kick-ass witch, a wickedly sexy ex-boyfriend and a whole lot of hybrid trouble."

I’ve been wanting to try Angela Addams for a while. When I saw a new series on NetGalley, I thought this was a great time to give her a try.

Kali Richards is a witch and a witch hunter. She has turned her back on her people after a traumatic event that left her two sisters dead. She goes after witches who are doing evil things. Some of witch hunter brethren feel that pretty much any witch is a bad witch. They want to kill all of the ones that don’t work for the Hunter’s Union.

Kali is going after a witch who killed another witch for the dead witch’s family. It seems that Kali is a bit over her head. Kali is not a great spell caster. She uses her shear strength as her advantage. She is also a great tracker. She is able to follow a witch’s magic trail to find them. Ivana, the witch that Kali believes killed the witch, is more than she seems. She is also extremely powerful. Kali almost gets herself killed several times on this case.

Wyatt shows up just in the knick of time to save Kali from a group of vampires. He is Kali’s ex-boyfriend. They did not end things on a good note, but there’s still chemistry there too. Wyatt has some healing powers, so he is able to heal Kali after the vampires almost drain her. Wyatt also has several secrets that come out throughout the book. One of which is a real doozy.

There is also Billy, who is a human who works at the Witch Hunter’s Union. Billy is a nice guy and treats Kali really well. He is everything that Wyatt is not. He does have a crush on Kali and had for a while. This didn’t come out until partway through this book and Kali had no idea. It seemed like there might be a love triangle, but by the end of the book, maybe not. I won’t say no, but looks unlikely. I hope not.

There is also some other secondary characters that I enjoyed. Sam and Clive also work for the Witch Hunter’s Union. Sam is a witch too. Clive is her partner. They are a fun pair. Drake is a seer who makes an appearance. I think he will have a larger part to play later in the series. Kali’s mom and dad are also a larger part of the story. Both see predictions, but with different degrees of success. Kali’s mom is usually pretty accurate, her dad, is rarely accurate.

Overall, I enjoyed the story. I liked the action of the war and investigating the murder of the witch girl, which wasn’t everything it seemed. I think this series with the war has a lot of potential. I was not a fan of the romance between Kali and Wyatt or the possibility of a love triangle thrown in with Billy. I thought Kali and Wyatt have some pretty large communication issues. Wyatt has a hard time showing any feelings at all and that has caused some issues with Kali, and rightly so. The book ends on a pretty big cliffhanger, so I think I will have to check out the next book to see where this story goes.