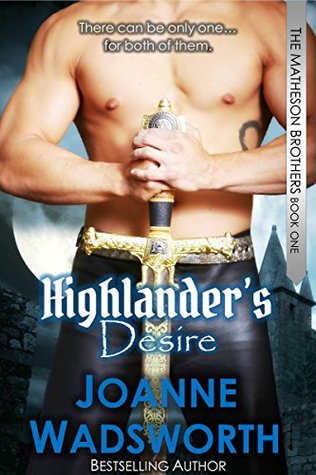 There can be only one…for both of them.

In the twelfth century, a man named Gilleoin was gifted with the ability to shift into a bear. His clan was called Matheson, and when he mated with a woman carrying faerie blood, they created a line shrouded in secrecy, yet still, far into the future, whispers would abound...

For five long years, Isla Matheson has run from the one man her fae ancestor prophesized would be hers, but now her time for running is done. Her shifter mate is closing in and when he captures her and takes her home to his clan, she can no longer deny either of them. She chooses to merge with him in all ways, and in doing so sets a twelfth century prophecy in motion, one that sends her hurtling back through time to when their clan first began.

Highland warrior shifter Iain Matheson has fallen under his mate’s spell. She’s the one woman he would die to protect, and when a portal opens and takes her from him, he dives in after her. He’ll never allow her to escape him, not even when he becomes embroiled in one of the greatest feuds raging at that time.

Now they have a mission, to save their future line from extinction, to give hope to their people, both in the future and the past.


Bear Shifters. Prophesy’s. Time travel to the twelfth century. Romance. Scotland. If any of that interests you, this just might be a book for you. It’s not a perfect book, has some rough patches here and there, but all in all, not a bad read.

Isla Matheson knows time is running out for her. For five years, she has been running from her true mate. She knows he is close to finding her and it’s the full moon. Not that they need a moon to shift, but it’s when he has the best chance to find her. But she’s an investigator(and daughter of the chief of her pack) for her pack, and two rogue killer bear shifters need to be caught before they kill again. So full moon or not, she and her best friend’s husband, Daniel, have to go hunting. Iain Matheson knows his chosen one is near, and he’s determined to find her. He’s the son of the chief of his clan, the other Matheson clan in Scotland. Both are part of a prophesy from the 1100’s, one that Isla isn’t too happy with in particular. The two clans are completely separate and hidden from one another due to the prophesy. When Isla and Daniel’s hunt takes the two near the other clans territory, all bets are off.

I liked both of the main characters of Isla and Iain. Isla is feisty and strong, and of course Iain is both strong and alpha. He is also very determined to make Isla his. Daniel was a good character, and is happily married with a baby. Too bad, as it would have been interesting to see him find his chosen one too. Iain is a triplet and his brothers are both involved a bit in this story, as well as being the two who the next two books are about.

There is some world building, and that’s always a good thing in any sort of paranormal book. Chosen mates are able to feel each other during the new moon. It’s a deep bond and one that will draw them both together. That Isla has been able to hide for so long is testament to her stubbornness and her unwillingness to leave her father behind to fulfill the prophesy. Her father that raised her after his chosen mate died a week after giving birth to Isla. He overcame the loss of his mate just for her, so she doesn’t want to leave him alone. I am not going to tell the details of the prophesy and will leave that to the reader to find out.

I did have some problems with this book however. The dialogue on many occasions is pretty cheesy, and I really am not a fan of over the top flowery dialogue between a couple. Also, at times the scene would be taking place in modern times, and they would still sound a bit like they were in the twelfth century. The book does jump back in forth from the 1100’s to the now. I didn’t have a problem with that, but the dialogue should fit the times. My biggest problem was with the amount of the sex scenes. I really don’t mind a good sex scene, or even several, and expect it in a paranormal romance, but when it starts taking over a good bit of the story, then I have problem with it.

I liked the shifter parts, the prophesy, the time travel, the romance, and the characters. I just wish the book had relied more on actual story and less on the sexy times. Since the other two brothers have to go even farther away to find their mates, I might be trying one of their stories at some point to see how that goes.