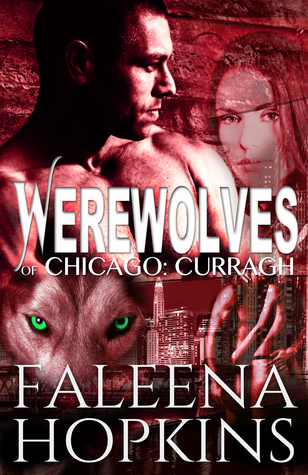 The tight black dress.
The booze in her hand.
The soft-brown bedroom eyes.
The acceptance of his invitation to join him in the bar's locked bathroom right after they meet.
None of these things could have warned him she was a f-ing off-duty cop and after the same bad dude he was. Fuhhhhhhhck.

Detective Kara Monaghan and wolf Curragh Dominion are after the same guy, but by very different means. When they meet as strangers in a bar and chemistry flies, they have NO idea they're on different sides of the law until after they've had their delicious fill of each other. He wants her to go away AND come closer. What's a stubborn beast to do when his wolf has a mind of its own?


When Brandee at Bookworm Brandee’s Blog, posted about the Chicago werewolves series, I immediately bought Howard’s story, and recently read it. Turned the page after finishing, and there was book one, Curragh’s story. So I continued reading even though I was reading them out of order. At first I wasn’t sure I was going to like that, but ended up enjoying both of the books-a lot. That being said, it will make more sense to you if you read Curragh’s story first. It was originally published as a serial, and then included in it’s entirety, with Howard’s story.

Whereas the New York werewolves(the original series)have respectable high paying jobs, the Chicago group operates pretty much on the wrong side of the law. Both groups work to help people that are being mugged, raped, assaulted, etc. Now the Chicago group has taken on the biggest mob boss in Chicago, someone the police have been hunting for nine years. Curragh and his packmates, Xavier and Draik, keep to themselves, except for the women they sleep with, and of course keep the secret of their existence away from humans. Kara, a human, has transferred from New York to Chicago as a police detective, after a bad divorce. She is assigned to the mob division. See where this is going? Well it got there a bit differently than you can imagine, because Kara and Curragh’s meeting has zip to do with the mob, and everything to do with a gritty sexual encounter between two strangers. And I can’t believe I am going to say this but, it totally worked for me!

As usual with this author’s characters, most are all fully realized and complex, with the exception of a full back story for the Chicago wolves. I would like to know more about their life before Chicago, and more about how they pay their bills. Hopefully, the farther we go into the series, more details will develop. I really liked Kara and how smart and sarcastic at times she is. But she’s also tough as nails, with a vulnerability that she rarely shows anyone. Curragh is the epitome of an alpha wolf. He too, is smart, strong, and he just met his vulnerability in the form of Kara. Howard is introduced as a skinny wimp of a medical examiner-and a wolf. He’s brilliant, and is already a doctor at twenty two. All Howard wants is to be accepted by a pack, as his own pack wants very little to do with a wimp.

This was filled with exciting scenes, piles of dead bodies, suspense, and over the top romance. Sexual chemistry for days. This author gets better with every book I read by her. I liked the New York werewolves, but so far I am loving the Chicago ones. There was nothing simple about this story, and the premise became pretty intricate as it went on. In the end, I really enjoyed Kara and Curragh’s story and really look forward to reading Xavier and Draik’s stories, as well.

Highly recommended to adult paranormal romance fans. I also think some urban fantasy fans that don’t mind a romance, would find a lot to like about this book-especially when the book ends up spending a good portion of the story with characters running around underneath the city as this one does.

FYI-I received both books bundled together, but that might have been a limited time offer.