I love food. Never missed a meal, unless I was sick, and my mama never had to call me twice for dinner. When people—my youngest daughter included—say, “I forgot to eat,” I shake my head in wonder.

I have never “forgotten” to eat.

In the South, celebrations, holidays, and times of mourning revolve around eating, and I cannot separate the memories of my childhood from the memories of good food. I remember dancing in the kitchen at suppertime as a child, salivating at the delicious smells coming from the stove and oven, and pecking my poor mother to death wanting to know when supper would be ready. I was an active kid, a tom boy who spent her days roaming the woods and riding my bike, and I was always hungry. Mama, bless her, was a good cook. Fried chicken, tender pork chops, catfish rolled in corn meal and fried to a crisp. Succulent pot roast with new potatoes and carrots, Swiss steak with peppers and onions, and salmon croquettes were a few of the entrees she whipped up. And the sides . . . Oh, my! Creamed potatoes, macaroni and cheese, oven-fried corn, turnip greens, cabbage, fried okra, peas and butter beans, and hot cornbread, to name a few.

We lived in a small town, and there was no ethnic food. None. Zip. Nada. We had a meat and three restaurant and three mom and pop burger joints, and that was it. We didn’t get a Pizza Hut until I was a senior in high school, and there were no Chinese or Mexican restaurants, no Tai food or Greek hummus. Sushi? Please. Where I come from, folks would’ve accused you of trying to feed them chum. My daddy didn’t like his food to touch, so I didn’t learn to eat casseroles until I went off to college. It was plain fare, simple and filling, and my salivary memories are strong. To this day, the smell of fried chicken gives me a visceral thrill.

I find myself reliving those happy times in my writing, and you will find descriptions of food in most of my books. Instead of Mama, however, the cook extraordinaire in the demon hunter series is Miss Vi, the owner, proprietor, and cook at The Sweet Shop Grille in Hannah, Alabama, the fictional town where my stories take place. Miss Vi, like my mother, is a downhome cook with strong opinions about food. “God made, homemade, and manmade, in that order,” Miss Vi says in Demon Hunting in Dixie. Her veggies are fresh and locally grown, she uses butter, not margarine, and her pies are piled high with sweet, fluffy meringue. She is the human representation of a childhood blessed with culinary bounty, a sort of female cornucopia of my happy memories at the table.

Food is a ritual that binds us together, nourishing body and soul. Lord bless the cooks.

Do you have any happy food memories? If so, what are they, and have you passed them along to your children?


Lexi George writes snarky, Southern-fried paranormal romance for Kensington. Her debut novel, Demon Hunting in Dixie, was released in 2011, and a novella and two more demon hunter books followed. Demon Hunting in a Dive Bar, the third book in the series, was nominated for a RITA in 2014. The fourth book, Demon Hunting with a Dixie Deb, is due to be released May 24, 2016. Lexi enjoys reading and writing romance, but her first love is fantasy. A Meddle of Wizards is the story of Raine Stewart, a sheltered, sickly young woman who comes into her own when she’s transported to a magical world, discovers her burgeoning powers as an adept, and faces the evil wizard who killed her parents. Lexi’s day job as an appellate attorney requires reading transcripts filled with murder, mayhem, and worse. Perhaps this is why she enjoys stories filled with humor, action, adventure, and magical creatures. She has a violent aversion to sad movies, having been scarred by Old Yeller at the age of nine. She drinks tea, not coffee, and has never seen The Exorcist, because she is a world-class chicken. She is the third of four children, with all the attendant neuroses.

With a drowsy sigh, she relaxed against him and went to sleep.

Grim stilled. A surge of lust hit him, hard and fierce. Sassy smelled delightful, a dizzying combination of summer roses and female. Curling tendrils of her hair lifted to caress his jaw, like flowers reaching for the sun.

I am her sword and shield. The vow rose unbidden in his mind. Here and now I vow to protect her, from anyone or anything that threatens her.
An admirable sentiment, I am sure, the Provider said, but hardly necessary. She leaves tomorrow, and you return to the hunt. That is good, is it not?

Then why the hollow ache in his chest? 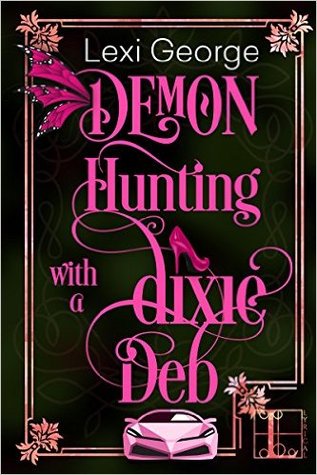 This Debutante Is Having A Ball!

Way down south in the land of cotton, one belle’s plans are soon forgotten–when Sassy Peterson drives her Maserati off the road to avoid a deer and lands smack-dab in the proverbial creek without a paddle. The Alabama heiress should have known something weird was going on when she saw the deer’s ginormous fangs. Hello, Predator Bambi!

But nothing can prepare her for the leather-clad, muscle-bound, golden-eyed sex god who rescues her. Who wears leather in May? That’s just the first of many questions Sassy has when her savior reveals he’s a demon hunter named Grim. Also: Why would a troop of fairies want to give her magical powers and rainbow hair? Why would a style-challenged beast called the Howling Hag want to hunt her down?

Most importantly, what’s a nice debutante like Sassy doing in a place like this anyway? Besides feeling Grim . . .