No man is an island. You need support. Two isn’t enough, according to Nick Hornsby, you need back up. Even if you are a pack of three it’s still a pack.

So, I guess I would have to say the pack is more important. They are your family, the one constant you can always rely on to be there for you. If your mate leaves you, or dies, you will still have your pack. Your mate is important, especially if you are leaders, but I still believe the pack comes first. The Lunam Ceremony follows this mentality. Kalysia finding her soulmate is secondary to why she needs one in the first place, which is to produce an heir to her bloodline. The future of the pack is at stake and she must fulfill her duty.

Kalysia loves Dillan, but their duty to the pack is what brought them together. Her loyalty to her mother is what kept her from running away and pursuing the life she thought she wanted. It’s the relationships and bonds Kalysia forms with the pack that drive the story. She grew up alone, her mother ran away with her when she was young. She comes back to fulfill her duty and realizes everything she missed out on. Growing up outside the pack was supposed to give her an edge over the others, really it makes her second guess her destiny. The story really is about Kalysia trying to find her place in the pack and how to lead her people with fairness and respect.

I also love that the pack takes care of its own, they provide not only monetary support and housing, but education and careers. It’s a very socialist environment. A wolf utopia, or so it seems. I don’t have a very large pack. I’m close with a handful of my family members, the rest I barely have contact with. Social media has actually helped me connect with some of my family. But the bond isn’t there. The loyalty and support of a pack really appeals to me. You always want what you don’t have.


Nicole was born and raised in California. She claims to be a San Francisco native, however she’s lived in both Northern and Southern California. She credits her creativity to the fact that she attended 12 schools between kindergarten and her senior year in high school. Her nomadic childhood allowed her to reinvent herself often. Some might say she was a liar. While others see the stories she told as a coping mechanism. Twelve schools, in six cities, in twelve years – give her a break. Today she channels her storytelling ability into writing novels. Long story short – kids that lie become writers. 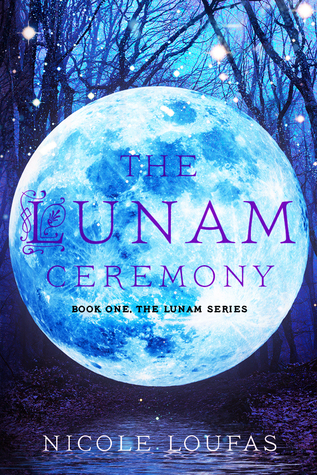 Born from a curse that allows her kind to shift from human to wolf, Kalysia won the genetic lottery. She is the offspring of an original, born to lead and bound by her duty to produce an heir to continue their bloodline she must leave the only life she has ever known to take part in The Lunam Ceremony. This ancient ritual will solidify her place in the pack and determine who she will love for the rest of her life. There’s just one problem – Kalysia doesn’t believe in love.

That changes when she falls into the hands of Dillan Dukes. The attraction is undeniable. The connection unbreakable. He is everything love at first site is supposed to be, suddenly her future doesn’t look that bad.

Unwilling to give up hope on going to college and having the life her and Dillan fantasize about outside the pack, she reluctantly takes on the role as pack leader. When an unexpected proposal is made that will grant both Dillan and Kalysia their freedom she is willing to put her ego, and her heart aside, to make her dream come true.

One act of selflessness.

For the life she’s always dreamt about.

Only things are not what they seem.

Can Kalysia and Dillan find happily ever after with the consequences of that night haunting them forever?

Will one fateful night destroy Kalysia’s future along with the future of the pack?