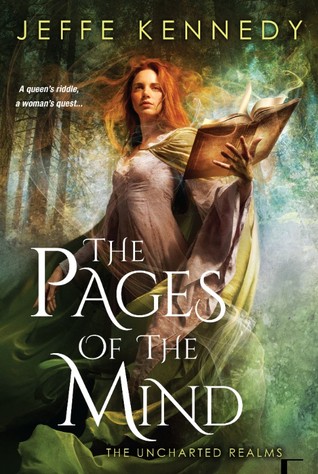 The Pages of the Mind by Jeffe Kennedy
Series: The Uncharted Realms #1, The Twelve Kingdoms #4
Published by Kensington
Published on: May 31, 2016
Genres: Fantasy, Fantasy Romance
Pages: 432
Source: NetGalley

Magic has broken free over the Twelve Kingdoms. The population is beset by shapeshifters and portents, landscapes that migrate, uncanny allies who are not quite human…and enemies eager to take advantage of the chaos.

Dafne Mailloux is no adventurer--she's a librarian. But the High Queen trusts Dafne's ability with languages, her way of winnowing the useful facts from a dusty scroll, and even more important, the subtlety and guile that three decades under the thumb of a tyrant taught her.

Dafne never thought to need those skills again. But she accepts her duty. Until her journey drops her into the arms of a barbarian king. He speaks no tongue she knows but that of power, yet he recognizes his captive as a valuable pawn. Dafne must submit to a wedding of alliance, becoming a prisoner-queen in a court she does not understand. If she is to save herself and her country, she will have to learn to read the heart of a wild stranger. And there are more secrets written there than even Dafne could suspect…

Praise for The Mark of the Tala

When I started The Twelve Kingdoms series, I thought it was a trilogy about the three royal sisters. I read all three books and felt that the story arc wrapped up really well. Imagine my surprise when I hear that there is a book four coming out. Not only that, but that it centers around Dafne, the beloved librarian who helped all three of the girls in their stories. She was probably the strongest secondary character in the first three books. She really was the rock that all three of the girls leaned on throughout the series. Now we get to see her have her own story. Yay!!

This story starts off with Harlan’s brother, Kral from Dasnaria, coming to Ordnung. He had been visiting the Nahanau islands. From the descriptions, I’m picturing something like Hawaii. A volcanic island nation that is very tropical. Even the mannerism of the people remind me of what I’ve seen of Hawaii (though I’ve never actually visited Hawaii). People with dark hair, dark skin, wearing skirts, flowered necklaces, bare feet. Anyway, it seem that Kral and his men are not able to get back to Dasnaria. The barrier seems to be keeping them in, so they came to Ordnung.

Queen Ursula convinces Dafne to go to this land and on to Dasnaria as a spy. For one, she speaks Dasnarian and she is great a ferreting out information. She is also very good at hiding under the radar as she did for most of her life under King Uorsin. Ursula is also quick to remind Dafne that there is more than strength of arms that one should fear, but also the strength of mind.

“This is why it’s perilous to ignore a librarian.”

When they arrive at the Nahanau islands, it is clear that there is a large language barrier. Even though Kral and his men have been there several times, language is still a large issue. Dafne, trying to be polite, actually accepts a marriage proposal from King Nakoa KauPo. He is not willing to let her leave. To prevent any diplomatic issues, Dafne sends the rest off and ask them to send rescue later.

The relationship between Nakoa and Dafne was an interesting one to watch. The language and cultural barrier made things very difficult for both of them. You could see that Nakoa really cared for Dafne, but there was something else there too. Dafne was obviously loyal to her queen and really felt like a bit of a prisoner. She was also very much eager to learn as much as she could about these new people, always the librarian.

Once again, the secondary characters in this story were great. In the first part of the story on the travel to Nahanau islands, we got to spend time with Kral, Jeep who is one of Ursula’s Hawks and Zynda, who is Ursula’s aunt on her mother’s side and a Tala with the ability to shape change into several different animals. Then once we are at the islands, there is Akamai, who is a librarian, who is very much like Dafne was in Ordnung. He was orphaned and just trying to get by being a scholar as much as he could. He also was a person who knew more than he ever let on. There’s Inoa, who is King Kakoa’s older sister. There is also Chief Tate who tries to take over as king. I really enjoyed all of these characters, well, except Tate, but he was evil and meant to be so.

I was very excited to spend more time in The Twelve Kingdoms, even if I didn’t get to spend much time with Ursula and got no time with Ami and Andi. We got to see new lands and meet some new characters. I loved watching the relationship build, especially with the language and cultural barrier. I’m hoping that we will see another book where we see Jeep and Kral on their trip to Dasnaria. For one, I want to learn more about that land. Two, I think they have a relationship coming there. I’m also interested in seeing how Akamai plays a role going forward. Will he be as instrumental as Dafne?

36 responses to “Review: The Pages of the Mind by Jeffe Kennedy (@mlsimmons, @jeffekennedy, @KensingtonBooks)”