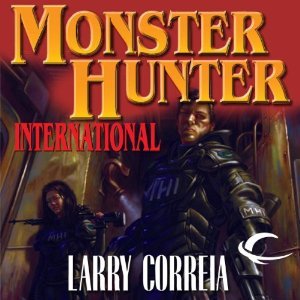 Five days after Owen Zastava Pitt pushed his insufferable boss out of a 14th story window, he woke up in the hospital with a scarred face, an unbelievable memory, and a job offer.

It turns out that monsters are real. All the things from myth, legend, and B-movies are out there, waiting in the shadows. Officially secret, some of them are evil, and some are just hungry. On the other side are the people who kill monsters for a living. Monster Hunter International is the premier eradication company in the business. And now Owen is their newest recruit.

It's actually a pretty sweet gig, except for one little problem. An ancient entity known as the Cursed One has returned to settle a centuries-old vendetta. Should the Cursed One succeed, it means the end of the world, and MHI is the only thing standing in his way.

With the clock ticking towards Armageddon, Owen finds himself trapped between legions of undead minions, belligerent federal agents, a cryptic ghost who has taken up residence inside his head, and the cursed family of the woman he loves. Business is good.... Welcome to Monster Hunter International.


I was shopping around for an fun author / narrator combo because nothing on my listening pile appealed to me at the time, and this audiobook was only $1.99 after downloading the free Kindle edition which made the cost vs reward a no-brainer. MONSTER HUNTER INTERNATIONAL was clichéd to the max with a hero that was made for the job, a similarly perfect female love interest, and Larry Correia dedicated more pages to describing the weaponry than to developing the characters or the world, but bottom line—I was wildly entertained!

This novel really was ridiculously excessive, so if you want a little more substance with your laughs then I’d suggest you try THE DRESDEN FILES by Jim Butcher instead. The humour is comparable, James Marsters excels as the reader, but the writing isn’t obnoxiously implausible. This story was complete, there were no cliff hangers, and it progressed from Pitt’s first encounter with a monster to him staving off the apocalypse as a full fledged member of MIH which was again a huge leap, yet also in all likelihood because the author didn’t know if this would become a series.

I really enjoyed Owen as a protagonist; he was fearless, a bit of a show-off, and brimming with snark which is a trait that I LOVE, especially when I’ve opted to go the audio route. The blurb describes him as an “average guy” when the only thing commonplace about him was his job, and even that was by design. After being a competitive marksman, bouncer and cage match fighter in his youth his goal was to pick the most boring profession possible, thus a CPA. The romance between him and Julie was also super stereotypical, however it fit in with the rest of the overkill.

Listening to the sample clip of Oliver Wyman was enough to hook me into signing up for 23+ hours. His macho tone was exactly what was needed for this three-hundred-pound lead, and he varied it enough so that it was clear when the first person POV was in internal monologue or external dialogue mode. The cast was fairly large, and Wyman made sure to work the accents to assist readers with keeping everyone straight. Even his female voices were good which is saying something because as a general rule the majority of male narrators struggle in this area.

MONSTER HUNTER INTERNATIONAL was so absurd in its hilarity that it was irresistible.