If you’re like me, and you’ve been slowly making your way through Cecy Robson’s WEIRD GIRLS series or maybe it’s still on your wishlist; either way, now’s a great time to snatch up the 6th installment, OF FLAME AND PROMISE, because it’s only $0.99 from May 10th to 21st. I listened to the first three audiobooks, and read the fourth, and I’m digging where the sisters’ story is headed. Check it out!

Excerpt
I’d woken only about an hour ago, Gemini’s warm, naked body curled against mine firing a need that required some serious quenching. So I buried my face in his lap to stir him from sleep.

Most women would have just said good morning, or nudged their partners ever so lovingly.

But I wasn’t most women.

Gemini slowed his deep thrusts, grunting hard as he finished, his face scrunched in what appeared to be pain. But that wasn’t pain, was it? Nope, not at all. He was simply reacting to how good it felt to join his body with mine. I nibbled my way along his neck, leaving marks that faded from one bite to the next until I reached his earlobe and tugged. “Mornin’, sexy,” I whispered.

He growled something I didn’t quite understand. I didn’t speak a word of wolf, yet that deep snarl was as good as the dirty talk we’d exchanged during sex.

I laughed. Okay, maybe it wasn’t as good as those naughty words. Yet a growl from a werewolf in his human form was a rare kind of hot few women would know.

I continued to straddle Gemini as he effortlessly carried us from the center of the room, where we’d made love standing up, and back to our bed. The gentle way in which he kissed me was in direct contrast to our wicked sex, and to the male most saw.

My lover was the second in command of the Tahoe region’s Squaw Valley Den Pack—intelligent, fierce, capable of crushing skulls, quietly confident, and with fighting skills few weres possessed.

Not to mention he was hotter than the power I generated with my magic.

All large anatomical parts and good looks aside, Gemini was . . . kind. When you trash-talked, and entered a room like you owned it like I did, it attracted a certain caliber of men. The kind that made me grateful I could protect myself with fire and lightning.

Men could be cruel, and dangerous. I knew that better than most. But unlike those men I’ve known in my past, I trusted Gemini.


Cecy (pronounced Sessy) Robson is the new adult and contemporary romance author of the Shattered Past series, the O’Brien Family novels and upcoming Carolina Beach novels, as well as the award-winning author of the Weird Girls urban fantasy romance series. A 2016 double nominated RITA® finalist for Once Pure and Once Kissed, Cecy is a recovering Jersey girl living in the South who enjoys carbs way too much, and exercise way too little. Gifted and cursed with an overactive imagination, you can typically find her on her laptop silencing the yappy characters in her head by telling their stories. 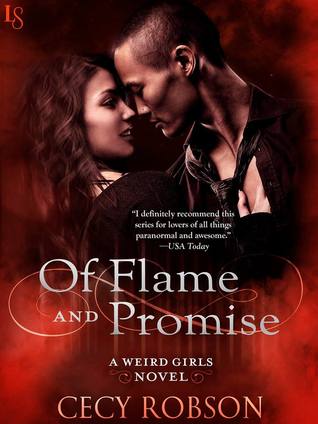 Perfect for fans of Keri Arthur and Bella Forrest, this short novel kicks off a sizzling new series in the award-winning Weird Girls saga as Celia’s sister Taran fights to have it all: independence, hot romance, and enough firepower to torch an army of blood-thirsty supernaturals.

2 responses to “#99cent Sale: Of Flame and Promise by Cecy Robson (@CecyRobson, @Tastybooktours)”