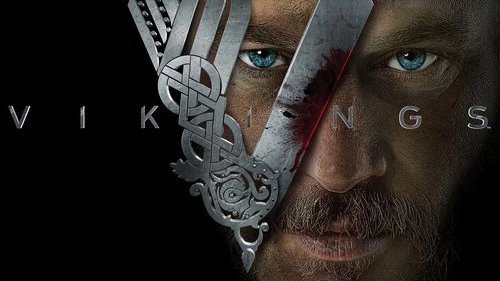 In the second season of VIKINGS, the storyline develops greatly, introducing new characters and expanding old ones.

BUT, unfortunately, all Travis Fimmel (the actor portraying main character Ragnar Lothbrok) does is overact.

Chief in his acting repertoire is his ability to imitate Brad Pitt, but this time around he consistently overshoots. Instead of communicating the seriousness of his intentions with a look, he goes straight to crazy eyes. When being reunited with old friends, his gestures are jerky and erratic rather than joyous and celebratory.

It’s both off-putting and sadly amusing.

BUT. With the surplus of new and newly engaging characters, Fimmel’s shenanigans are more of a distraction than the primary source of entertainment.

A four years older Bjorn is easy on the eyes as well as compelling in his desire to prove himself to the father he worships. A redeemed Rollo gives us a new Lothbrok to drool root for. Lagertha, as always, is kick-ass.

And watching Aslaug reap what she’s sown is positively delightful. But it’s King Ecbert of Wessex who is the most interesting (new) character. To all appearances, he is a devout Christian man like all of his peers, but he has hidden depths:

“The fact is, Athelstan, we have lost more knowledge than we have ever had! These Romans knew things that we will never know. Their pagan gods allowed them to rule the world. And what is the lesson we can learn from that?”

He’s meant to be a more refined, but just as curious and ambitious answer to the barbarous Ragnar, and he performs his task admirably.

THERE WILL BE MINOR SPOILERS IN THIS SECTION. That’s without the spoiler tags. The spoiler tags are not hiding minor spoilers, they’re hiding HEP BIG spoilers. There will also be season 1 spoilers. FYI.

The war over the land dispute between King Horik and Earl Borg begins with Ragnar on one side and Rollo on the other. *EDVARD MUNCH FACE*

And I mean that literally—I will never understand the stupidity of two opposing war parties standing in a nice, orderly line, then running at each other. In the fray, Rollo kills (horrifically) one of his former friends and gravely injures Floki, but can’t bring himself to fight Ragnar. Horik and Borg are again unable to reach an amicable agreement (b/c Borg is an ASS), but Ragnar convinces both men that rather than fighting against themselves, they should be expanding outwards, and they agree to raid together.

Rollo is disgraced. View Spoiler »The penalty for his actions is death, but Ragnar secretly buys the verdict of the law giver. « Hide Spoiler

Ragnar proposes that both Aslaug and Lagertha stay in Kattegat in a . . . wifely capacity, View Spoiler »so Lagertha leaves, and Bjorn decides to go with her. « Hide Spoiler Ragnar is all busted up about it, but WHO CARES?! B/c his own fault, the slimeball. Ragnar needed more boats and more men before returning to England, so four years has passed since the end of episode one.

1. Aslaug has popped out two sons and has a third on the way.

While her beauty, novelty, and fertility inspired Ragnar to wreck his marriage with Lagertha, he truly loved his first wife, and that love has clearly not transferred to Aslaug. 2. Rollo has become a drunk as well as an outcast.

3. Animosity between Floki and Athelstan has intensified (albeit one-sided).

4. Athelstan has grown to respect and believe in the Norse gods, which conflicts with his Christian beliefs.

View Spoiler »Aslaug reveals she is a seeress. « Hide Spoiler

Horik tells Ragnar he no longer wants Borg to be a part of their upcoming raids and leaves it to Ragnar to break the news.

Borg tries to turn Rollo against Ragnar again. View Spoiler »Rollo decks the shit out of him. (YAS!!) « Hide Spoiler

Ragnar and Horik sail for Northumbria. BUT. They hit storms on their way and lose several ships. They also get blown off course and land in Wessex.

Ecbert reveals Winchester View Spoiler »was a “necessary sacrifice” to learn about the invaders. « Hide Spoiler Rollo defends Kattegat against View Spoiler »Earl Borg, then flees with Aslaug and her (and Ragnar’s) sons. « Hide Spoiler

After establishing his rule in View Spoiler »Kattegat « Hide Spoiler, Borg visits the Seer who gives him a foretelling he interprets positively. Ragnar tells Ecbert he’d like to establish a colony in England, and Ecbert says he’d consider granting the land should the Vikings agree to fight on his behalf.

News arrives that View Spoiler »Kattegat has been invaded « Hide Spoiler, and Ragnar leaves England immediately. King Horik stays behind, and Athelstan stays behind as well to translate.

The Vikings who stayed behind in England View Spoiler »are attacked and killed. Athelstan is captured and crucified as an apostate. Ecbert frees him, but not before he’s nailed to a cross. « Hide Spoiler

Borg reacts as anticipated and finds himself overwhelmed by Ragnar’s reinforcements. He is forced to retreat, fleeing back to his own lands.

Ragnar once again wishes to have both Lagertha and Aslaug. Lagertha once again says, pfffffft (b/c AWESOME).

King Horik returns to Kattegat. Without Athelstan. Hell-bent on revenge against King Ecbert, he tells Ragnar they must make peace with Earl Borg, and sends Rollo to do it.

Lagertha returns to Sigvard (her husband and earl), who takes it as an insult that Bjorn stayed with Ragnar.

Rollo arrives in Gotland where Borg seeks the advice of his dead first wife’s skull. B/c CRAY. View Spoiler »Lagertha stabs Sigvard in the eye and becomes earl in his stead. « Hide Spoiler

Ragnar’s men attack View Spoiler »Borg in the night, taking him prisoner, and the truth of the seer’s prophecy is revealed. « Hide Spoiler Dun, dun, dunnnnn.

Ragnar hilariously warns Bjorn to think with his big head, not his little head.

The seer tells Ragnar that Athelstan is still alive, but his spirit is “tormented.” (Also CRAY.) Floki shows (once again) through good counsel to Bjorn that he is crazy LIKE A FOX.

Aelle and Ecbert form an alliance against the Vikings, cementing it with the marriage of their children, Judith to Aethelwulf. The simultaneous marriage of Floki and Helga juxtaposes the pagan and Christian ceremonies. I LOVE IT. Kwenthrith, would-be queen of Mercia, arrives in Wessex. She is . . . unsettling in her speech and actions. Ragnar is overruled by Lagertha and Horik when he wishes to negotiate with Ecbert. View Spoiler »They attack Aethelwulf’s party, leaving only Aethewulf himself alive. « Hide Spoiler

Athelstan is sent to treat with the Vikings. Ragnar and Lagertha agree to speak with Ecbert. King Horik’s extended family arrives in Kattegat. He speaks of continued alliance, but his intentions may be less noble.

Lagertha and Aslaug have an ominous meeting on the beach:

Aslaug: The gods are coming.
Lagertha: I know.
*thunder in the background*

Gratuitous shots of Rollo, b/c I LOVE HIM:

And that’s all, folks! For season 2, anyway. I’m loving VIKINGS so much that next season, I might try to make a weekly post out of each new episode’s recap. In the meantime, season 3’s review should be ready for next week, and I hope I’m making some of you curious enough to check it out yourself. REMEMBER, seasons 1 – 3 are FREE with Amazon Prime.

ALSO, someone pointed out in the comments of my review of season 1 that VIKINGS isn’t a show for children. I thought the “BEWARE” button would’ve been sufficient notice of that fact, but since it evidently wasn’t: VIKINGS is definitely NOT kid-friendly. If you have any, make sure they’re otherwise engaged before watching. You have been duly warned. *winks* Happy viewing!