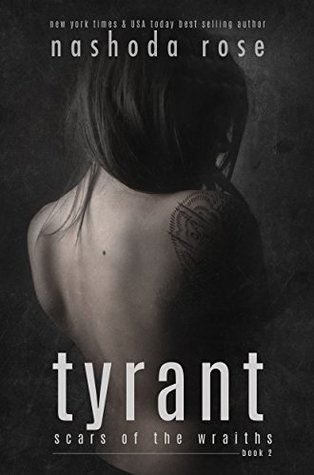 Kilter is crass, reckless and stubborn. He has alienated everyone—just the way he likes it. Until the day he meets Rayne and emotions he buried long ago reawaken.

“I was nothing but a science experiment.” -Rayne

Rayne has been locked away and used for research ever since she was a child. The abuse caused her to withdraw into a tomb of numbness where she’s found a safe place to hide. But her safe place isn’t safe at all, it’s slowly killing her.

When Kilter rescues her and she is unexpectedly drawn to his raw honesty, Rayne must decide whether to trust him and fight for what she can’t see or drown into the depths of darkness.

For some Scars, it’s the story of healing and redemption, for others it’s the beginning of a tortured existence. Which will it be for Kilter and Rayne?

Stygian was a fantastic start to this new urban fantasy series, and introduced a new paranormal supe known as Scars. After reading it, I immediately jumped into Tyrant, book 2 in this increasingly good series. It ended up being a good sequel, and well worth the read. If you haven’t read the first one, you will be hopelessly lost if you try to read this one first. There are going to be a few spoilers ahead so keep that in mind, but I will try to keep them as tiny as I can.

Kilter was introduced in Stygian, as a Scar with a hairpin trigger temper, and a man that truly hates people. When he spent some quality time(not) with Rayne, a woman he meets at her evil husband’s compound while trying to break another Scar out of captivity, he never thought he would see her again. But he made a promise to her, so he goes back for her. Rayne has been in captivity since she was ten years old, when her parents died. She ended up in the compound that does horrible testing on paranormal creatures. She’s almost broken and suffers from anorexia. Meeting Kilter was the first good thing that has happened to her since she lost her parents.

The story of these two and how they eventually fall for each other would have made for a story all on its own, but the author introduces us to a young witch, Abby, and another Scar, Damien. These two end up with major problems after Abby tastes a drop of vampire blood, while drunk. Liam, the vampire, wants Abby for himself, and Abby wont be able to resist him with his blood in her, making her his slave forever. However, Abby has an even bigger secret and Damien, her recent fling, finds himself in the fight of his life to save her from this fate.

The book jumps between these two story threads and also weaves in some smaller ones. All the characters from the first book are back. We continue to get more information on Waleron and his back story, and more about his feelings for Delara. Some of the book is told from both of their perspectives. Jedrick, the Scar I had thought of as comic relief, is a bit more serious this time around. I will be interested to get his story at some point-soon hopefully.

I continued to enjoy the authors world building. In addition to the one drop of vampire blood and what it can cause, she also included another new group of supernatural characters known as CWO’s(Center World Others)that originate from the center of the earth. They are insects and take over recently deceased human bodies. Scars are tasked with ridding the world of these creatures as just one of their warrior duties.

If you are an adult urban fantasy/paranormal romance fan, this series is one you shouldn’t overlook. I enjoyed all the characters, the premise, the romance, and of course the world building. Good Read!