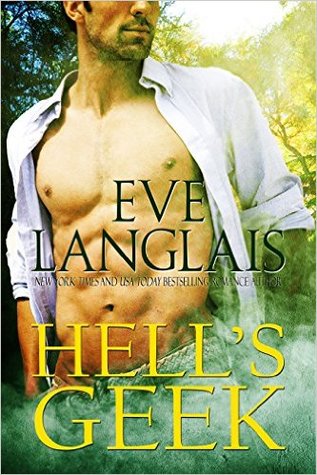 Being smart in Hell isn’t a blessing, it’s a curse. Poor Adexios, he just can’t live up to his dad's reputation—nor does he want to. He’s got bigger dreams than ferrying damned souls the rest of his life.

Problem is Lucifer’s up to his matchmaking tricks again and is determined to pair him with a violent Amazon warrior—with bodacious curves.

Dragged into the wilds of Hell, Adexios is supposed to locate demons and conscript them to the legion, but instead discovers a malignant force is at work, and if they’re not careful it might claim their lives.

Ahhh… Back in the world of Lucifer. Adexios, Charon’s son, has been a minor character in the Welcome to Hell series for a while now (and the Princess of Hell series). He, himself, hasn’t had a lot of page time, but Charon and Lucifer have talked about his a lot. They have frequently mentioned about his failure to follow in father’s footsteps as the River Styx ferryman. He is always losing his ore or the boat will capsize or other mishaps which seem to only happen to Adexios. Well, we finally get to hear Adexios’ story.

Lucifer has decided to send him into the wilds of Hell to count the demons there with an Amazon woman named Valaska. We met her in the previous book. She is quite the warrior woman. She hasn’t found something that she couldn’t kill or a solution that didn’t involve a fight with something. She was all about dying in battle and with honor. She also didn’t believe in relationships with men. None of her kind did. That is until she spends some time with the geeky and clumsy Dex.

It doesn’t take long while in the wild to see how different these two are. Adexios is very cunning. He came very prepared for this trip into the wild of Hell. Instead of living off the land as Valaska intended (like a real warrior) Adexios had a backpack with a portal to his mother’s refrigerator to provide him with meals. Valaska is appalled by idea of this and eats the local weeds.

It doesn’t take them long to figure out something is wrong in the Wilds. First, they aren’t finding any demons. Second, they start to see these weird puddles that aren’t native to Hell. They have to find out where the water is coming from. They quickly learn that someone is behind it, but the question is who.

In this story, we have the most of Lucifer that we’ve seen so far in this series. There is quite a bit of his POV, which was a lot of fun. We also learn more about Gaia, his lover and Mother Earth. It also looks like this isn’t going to be the last of the stories from Hell, which is great news to me. I love my time with Lucifer and his shenanigans.

“If at first you don’t succeed, cheat.” From Lucifer’s Guilt to Ultimate Domination

“Are you wearing a sailor suit” she asked.
“With a few modifications,” he added with a large helping of pride. He angled his hips forward. “I wasn’t crazy about all that white, so I got the pants and shirt in a lovely black. The ascot, as you can see, has been hand-stitched with sharks.”
“With horns,” Neptune added, his voice choked. Probably in envy. Not everyone was blessed by Lucifer’s ingrained sense of style.
“I also had them embroider the savage fish on my hat.” Lucifer tapped the brim.
“Is it me or do I hear the theme song from Jaws?” She asked.
“It’s all about attention to detail,” Lucifer confided.